An Afternoon With The Love Activists

A group of people who call themselves the “Love Activists” are currently occupying an old bank on Castle Street. Whilst they operate under that alias, they’ve been having a marmite effect on the city of Liverpool.

The people are divided and they either love it or hate it. Depending on whose press release you’ve read, you may have completely different opinions of the Love Activists. From one side they’re peaceful protesters opposing rising levels of austerity and reclaiming buildings and wealth in a modern-day Robin Hood act of valiance, taking donations from the public in order to shelter and feed homeless people every night. On the other hand, they’re seen as vandals who are defacing a listed building in Liverpool behind the guise of a Guy Fawkes mask. Which group where we going to meet on that day? Peaceful, misinterpreted ambassadors of love or misled anarchists? Only time would tell… 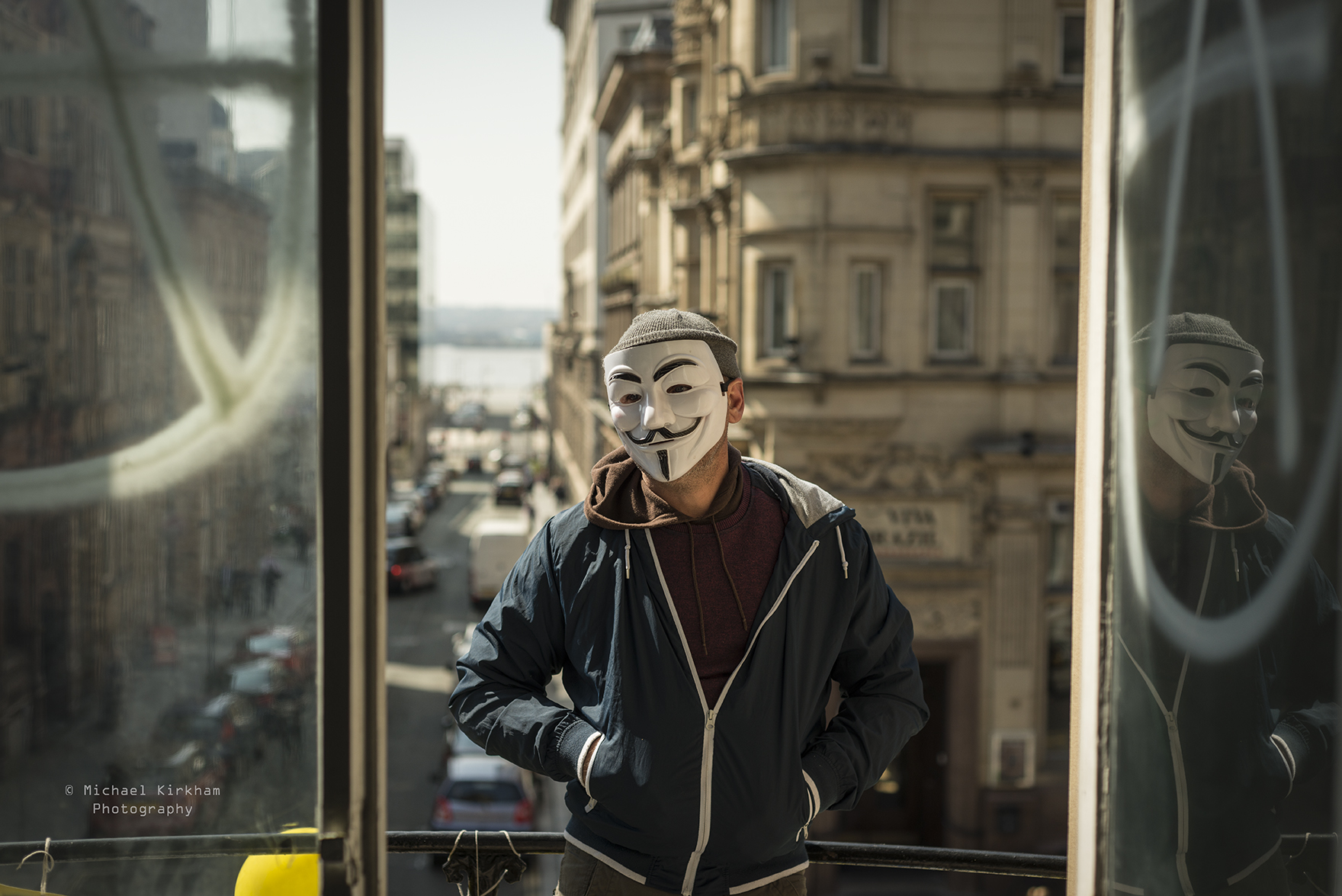 Upon the stroll to Castle Street there were a lot of people taking pictures, cars beeping and police wandering past. We didn’t need Google maps to let us know we’d arrived at our destination. A beautiful Georgian building is now draped in signs demanding sanctuary, peace and love and people from all walks of life occupied the balconies. We entered through the side door as a man was donating bottles of water to the cause as they’d recently had their water turned off and his generosity was much appreciated. The Love Activists aren’t a hierarchal group, there was no leader, but a member of the group offered to show us around. We navigated from room to room and were surprised that each room had a purpose, despite the building only being occupied since Saturday. There was a room with many homeless people eating, a room for activist meetings and quite a few rooms with homeless people sleeping. A distant display from what the building was once built for. This isn’t the first stance they’ve made, they were evicted from a Royal Bank of Scotland in Central London for using the premise to feed the homeless on Christmas eve. Read more here. 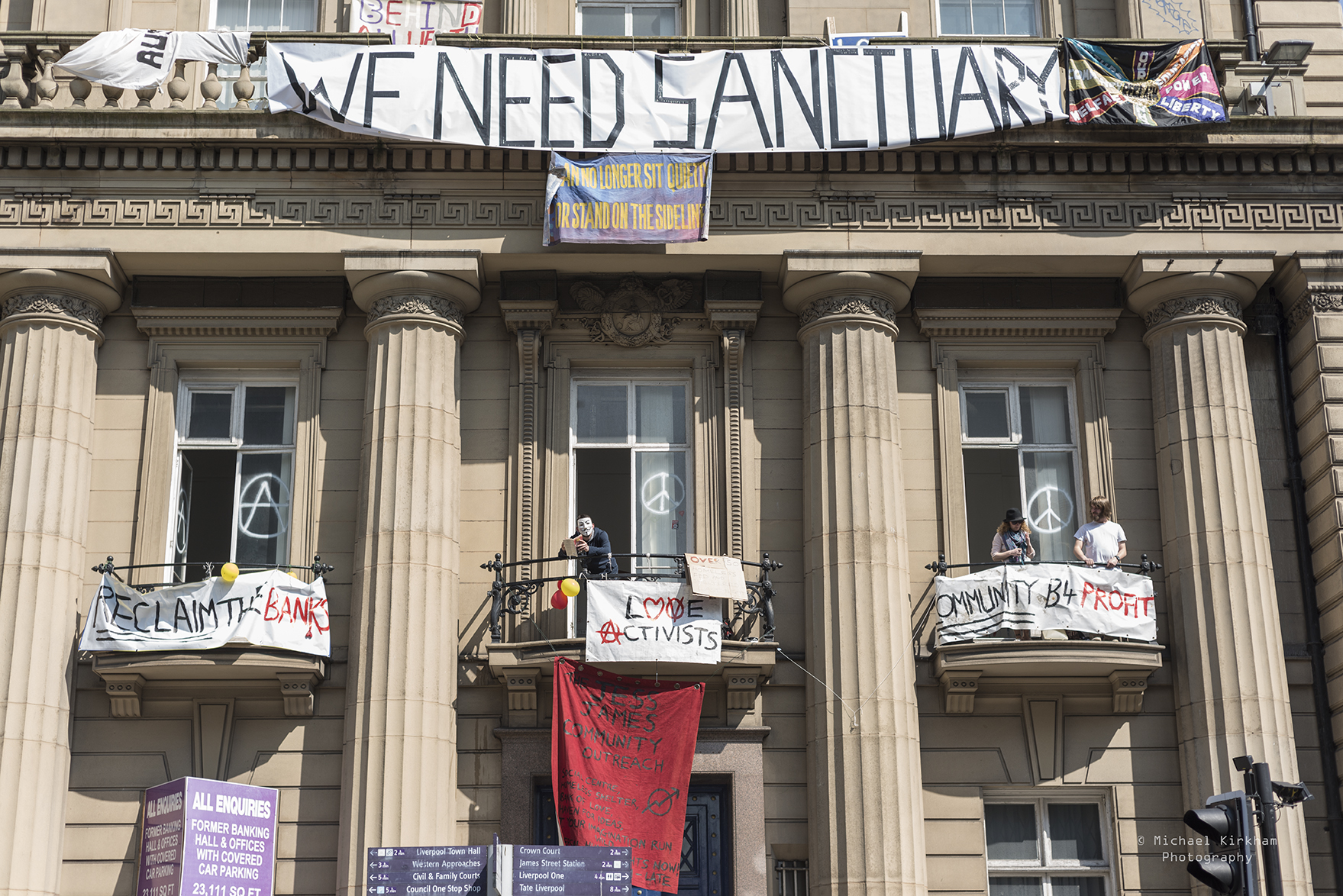 After the grand tour we got a chance to sit down and talk to some of the people behind it. One of the biggest things people wanted us to talk about was the graffiti on the walls of the building. First of all, we do not condone and are totally against these actions and we were interested to hear their take on it. You could hear genuine sincerity in the words of the members and they seemed deeply saddened that the actions of a few had polluted their whole party. They assured us that these actions were not reflective of their work, their notion or their cause and are working with local businesses to remove it off the building. They seem to agree with the general consensus that the graffiti is a huge shame and it completely detracts people from the good work they are trying to do. We got to meet countless homeless people who where exclaiming they had the best night’s sleep of their life and had people making them cups of tea and coffee. It was fantastic to see how many people had donated food, there were boxes and boxes and piles and piles of food that we can assure you were getting put to good use. 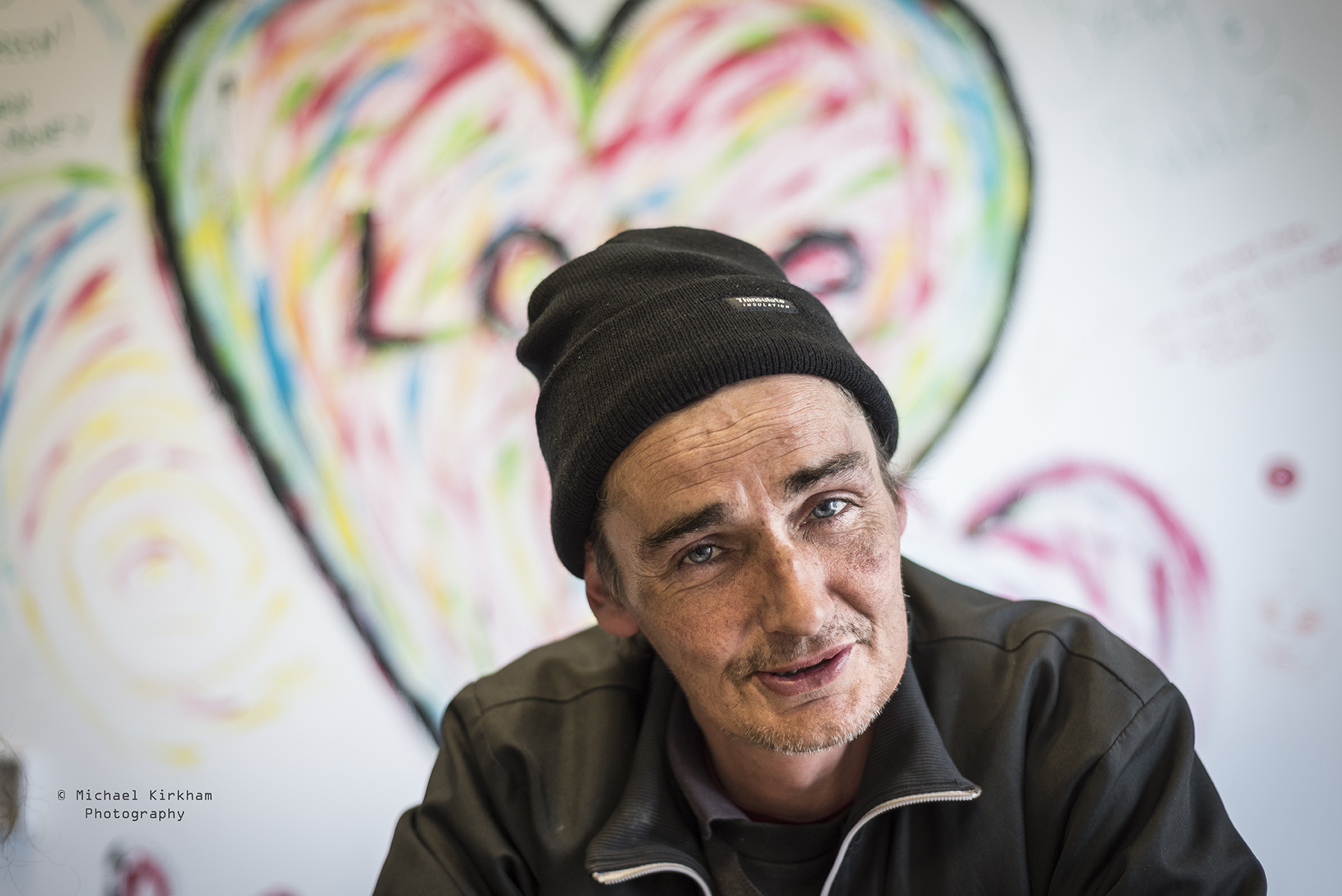 After we said our goodbye’s to the Love Activists we felt slightly perplexed. It’s a huge shame that it has become a debate about vandalism rather than homelessness. As the walls were tainted with spray paint, so has the work and name of the Love Activists. Since opening they’ve been feeding and sheltering over 50 homeless people a night and whilst no-one can condone the defacing, we can’t help but admire those figures. We know everybody has their opinions of the way Love Activists operate and whatever they do it is going to result in fierce debates. Some are infatuated by that true and rare rebellion and others feel it is completely unnecessary. However you see it, we hope that people are aware of the current homelessness state in Liverpool. Yes it shouldn’t need an old bank to be occupied by activists to make people realise but sometimes it takes big actions to result in big changes. 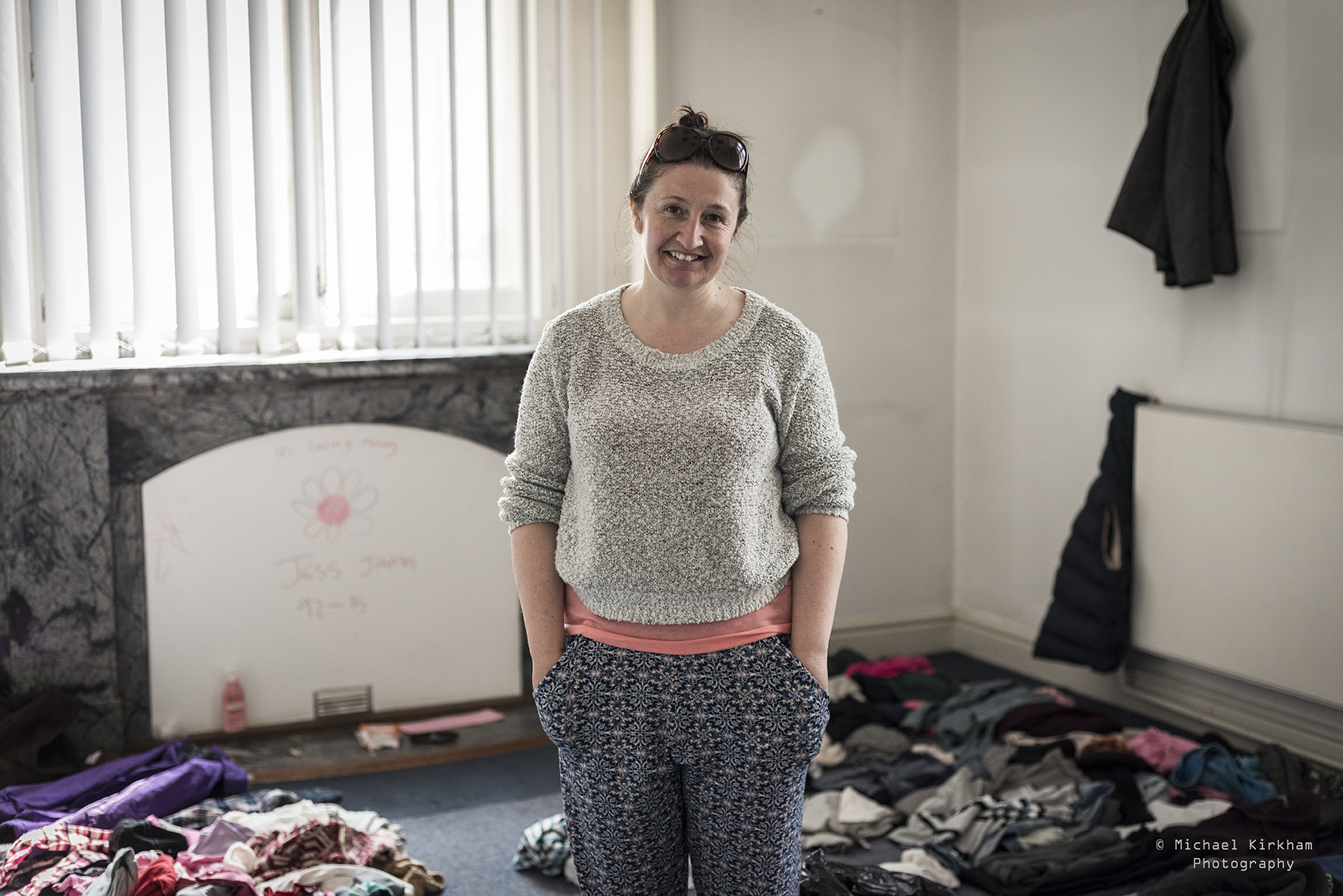 The Love Activists appear in court against the owners of the building next Tuesday. Their water supply has been cut off and I think they know their days are limited. They see themselves as an “extremist charity” and whilst this building won’t be their home forever, their cause has prompted people to challenge their own views on homelessness. We think, underneath it all, that is what is most important. This is why we encourage you to turn to the likes of Whitechapel Centre and Liverpool Homeless FC and help them with the amazing work they do. Last year The Whitechapel Centre seen 2,500 people come through the doors and for the price of a coffee a month, you could really help them tackle this tragic epidemic. The state of homelessness in society has worsened but one positive is seeing the efforts people, charities and activists are doing to correct this. It is a sign the average human is becoming more compassionate to the cause and whilst we assume you won’t want to stand on a balcony in a Guy Fawkes mask to help the cause, there are lots of ways you can still help. Underneath all of the accusations, actions and colourful banners, empowering the average individual is the true aim of the Love Activists. 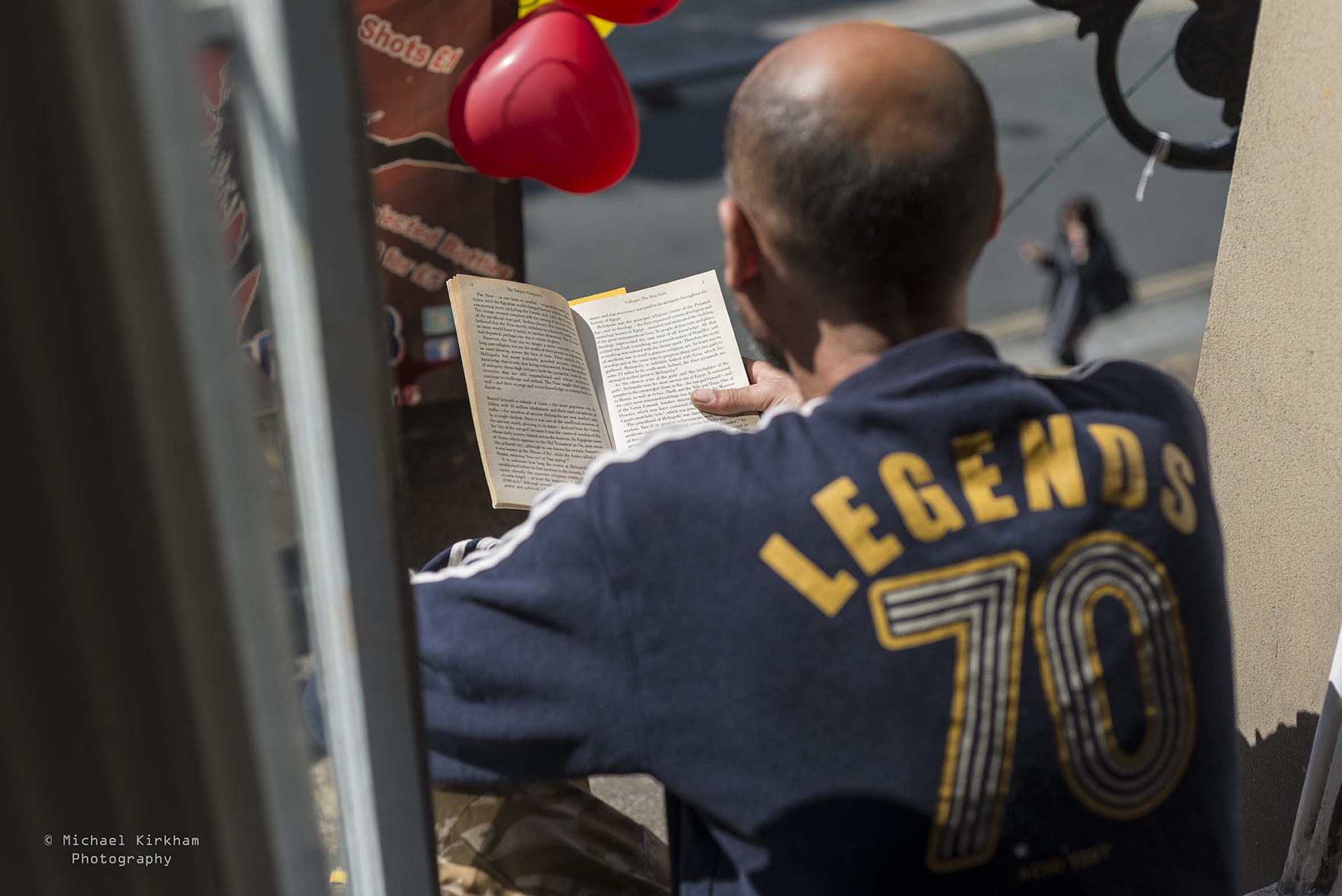