Writing on the Wall (WoW) is proud to announce they won the Art’s Organisation of the Year Award at this year’s LCR Culture & Creativity Awards. Recognising the cultural impact and vital work of creative organisations in the Liverpool City Region, the LCR awards saw more than 700 organisations nominated and over 30 organisations and individuals shortlisted for awars.

The Art’s Organisation of the Year award is in recognition of the incredible work produced over the last year in which the literature charity has launched two month-long festivals, ran 14 projects, launched The Writer’s Bloc (a writing centre that has been in the hearts and plans of WoW from its start) and reached over 100,000 people digitally.

The awards evening saw Writing on the Wall, nominated for three categories, including the People’s Choice Awards and Covid-19 Creative Response (organisations) award. It has been an honour to have been included in a list of organisations that have worked so hard to push boundaries during a difficult time and have been lifelines for so many people during these periods of isolation. 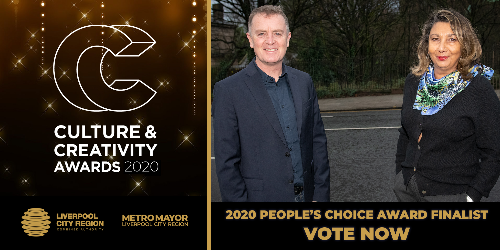 WoW are so delighted to have been awarded such a prestigious award and would like to offer a thank you to the trustees, supporters, funders, partners, participants, guests, audiences, and the WoW team whose support has allowed WoW to achieve so much this year.

“We are thrilled to have won the Arts Organisation of the Year Award, we are so proud of everything that has been produced from our year, and receiving this award is a wonderful recognition of our achievements. However, nothing we have achieved could have been done without our supporters, funders, trustees, partners, participants, audiences, and the WoW Team. It is through your commitment to WoW that we have been able to achieve so much and this award is as much yours as it is ours.” 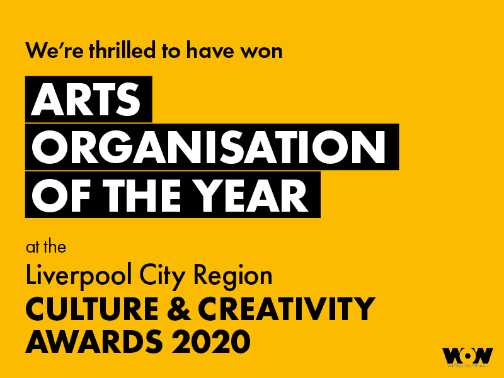 Madeline Heneghan and Mike Morris (Writing on the Wall Co-Directors)

Writing on the Wall’s Writer’s Bloc is live now with their latest Writer on the Bloc Kevin Dyer bringing his writing expertise to participants across the world as well as WoWFEST21 coming soon, looks like 2021 is going to be just as exciting a year as the last year was. To find out more about the latest exciting projects, events and festivals WoW have in store visit – www.writingonthewall.org.uk