The Opening of the World’s First Inter-city Passenger Railway

TECHNICALLY, THE FIRST PASSENGERS TO RIDE ON A PURPOSE BUILT STEAM RAILWAY DID SO IN 1825, ON THE STOCKTON TO DARLINGTON LINE. HOWEVER, THE PASSENGER CARRIAGES ON THIS TRACK WERE PULLED BY HORSE, NOT BY LOCOMOTIVE.

But, in 1830, five years later, a new railway line was opened. This line was built mainly for the transport of people and designed as such that the passenger carriages were to be hauled by steam locomotive.

The Liverpool and Manchester Railway ran from Crown Street, just outside of the town centre of Liverpool, to Liverpool Street in Castlefield in Manchester and is officially recognised as the first inter-city passenger railway in the world. 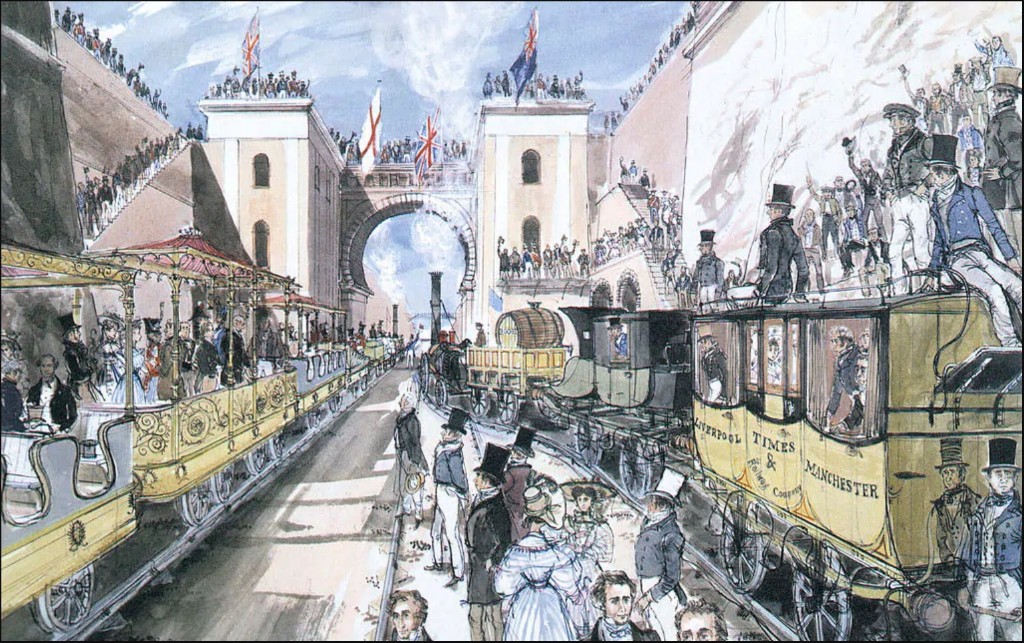 On the 15th September 1830, the Liverpool and Manchester Railway was opened with much aplomb and celebration. It was a grand affair with many notable people attending.  These included the Prime Minister, Arthur Wellesley the 1st Duke of Wellington (who officially declared the railway open), Robert Peel, and the MP for Liverpool, William Huskisson.

The construction of the railway boasted several impressive engineering feats, one of which was the swamp crossing at Chat Moss, a huge area that was full of mossy peat. The crossing was managed by spreading the load of the track and passing locomotives and trains over a wide area and was accomplished by effectively creating a raft of heather, brushwood and timber that ‘floated’ on top of the peat on which the bed for the railway track was built. Other impressive accomplishments on the route included the nine-span Sankey Viaduct and the cutting at Olive Mount that is up to 21m deep in parts.

Unfortunately, the overall mood of the day was soured by a series of calamitous events.

At 11:20, when a cannon was fired to announce the departure of the trains a piece of shell casing that was ejected from the cannon hit a spectator in the face and left the poor man with a grisly injury – his eye was left hanging from the socket across his cheek.

Then, near to St Helen’s, one of the locomotives, Phoenix, jumped the track and came to a halt causing the following vehicle, North Star, that was unable to stop in time to run into its rear.

That was not the end of the bad luck for the new railway, however, worse was yet to come…

As the trains came to a halt at Parkside for the locomotives to take on water, all of the passengers were asked to remain in their seats, but many of them ignored this request and got out to mingle at the side of the tracks. William Huskisson, the MP for Liverpool, thought that would be a perfect opportunity to heal a long-standing rift between himself and the prime minister. Huskisson climbed from his carriage and made his way to where the Prime Minister was seated. The duke warmly welcomed Liverpool’s MP, so Huskisson opened the carriage door to shake his hand.

Whilst this was happening, Rocket, George Stephenson’s famous locomotive, was approaching on the parallel track. Huskisson heard people shouting warnings to him and panicked. He tried to climb into the carriage but slipped.  The door on which he was holding onto, swung open and threw him onto the railway line and his extended leg fell across the track that Rocket was on.  The engineer in charge of Rocket tried to stop the locomotive but could not do so in time.  Huskisson’s leg was run over and was crushed and badly mangled. 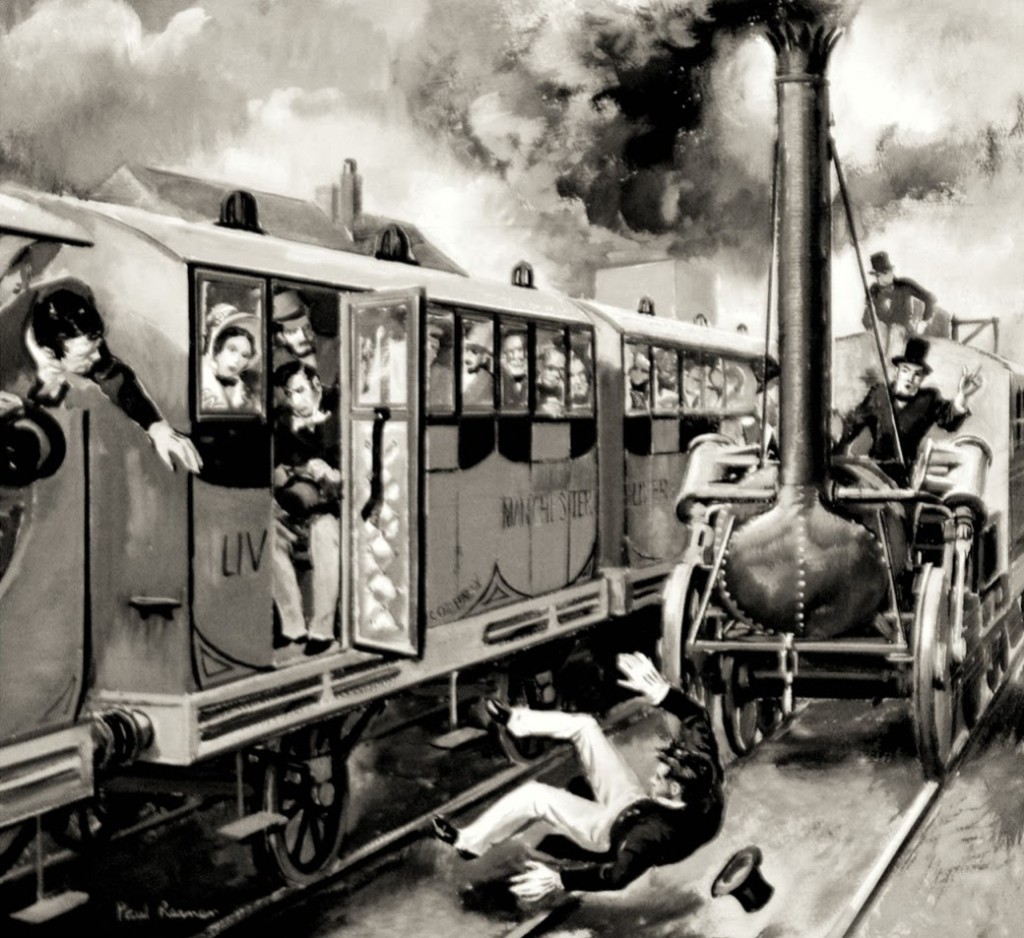 After the horrendous accident, William Huskisson was treated on site by doctors who were present and was then taken to the vicarage at Eccles where he was attended by a surgeon. Alas, at 9pm on that same day, he died from his injuries.

William Huskisson was laid to rest in St James Cemetery and a magnificent mausoleum, designed by John Foster, was erected over his grave after being paid for by public subscription. 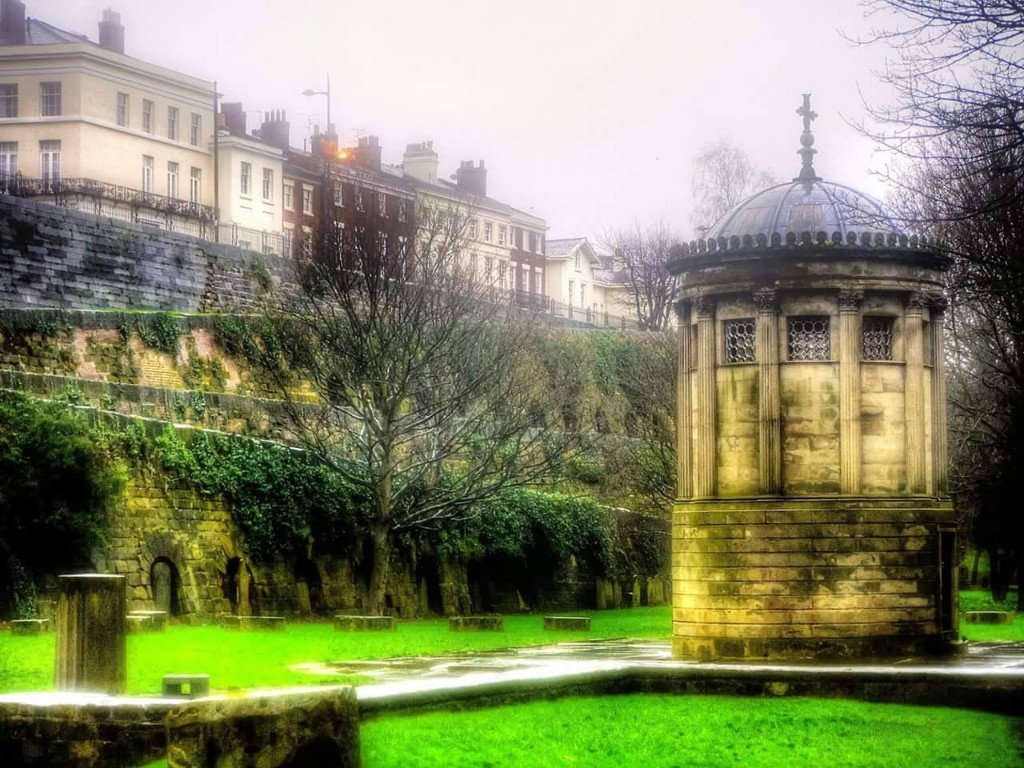 The mausoleum still stands and is as impressive today as it was when it was built but is now empty. It originally contained a marble statue of Huskisson that had been commissioned by his wife and was carved by the Liverpool born sculptor, John Gibson. In 1968, the statue was removed from the mausoleum and rehoused in the Walker Art Gallery.

Huskisson’s wife commissioned other copies of the statue, a second marble one, that stands in Pimlico Gardens in London and a bronze one that originally stood outside of Custom House in Canning Place.

After the demolition of Custom House, the statue was moved to the junction of Princes Avenue and Princes Road but was pulled down from its pedestal during the Toxteth Riots in 1981. 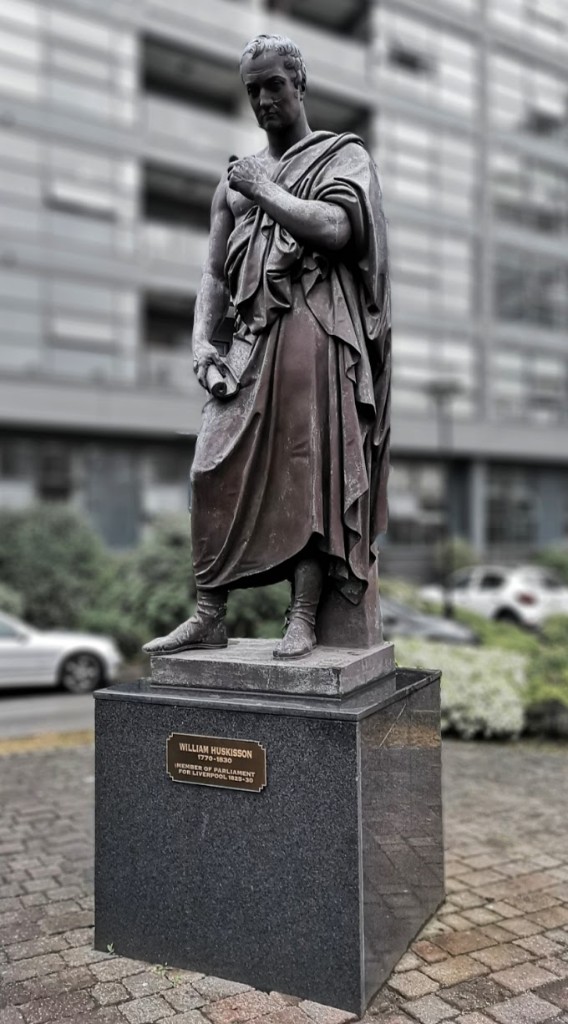 It was then kept in storage until 1997 when it was restored and placed in its present location, near to Duke’s Terrace, off Duke Street.

In March 2010, it was made a Grade II listed monument

BONUS FACT: The reason why William Huskisson’s statue has him dressed in robes, is that it was thought that classical style dress looked more distinguished than the contemporary dress of the day

BONUS #2:  A full transcription of the events of the day, as reported by a newspaper at the time, is available here: https://goo.gl/MCY77i