St George’s Hall is one of the most loved buildings in Liverpool and is internationally acclaimed as being one, if not the, finest examples of a neo-classical building in the entire world. But did you know that the outside of the building is different to how it was when it originally was built? 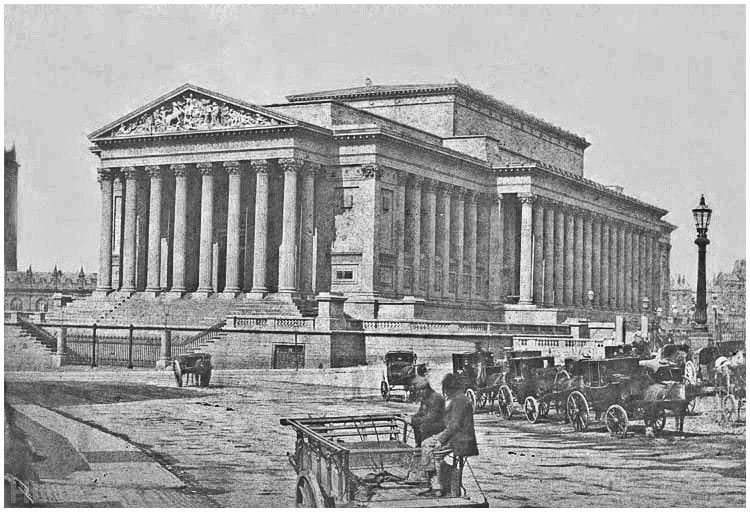 This is one of the earliest photographs of St George’s Hall and we can date it relatively accurately due to two facts. Firstly, because of the steps up to the South Entrance. We know, because of newspaper reports at the time, that they had been removed by the December of 1854. Secondly, we also know the name of the photographer – it is accredited to a ‘Mr Forrest’. Now, under normal circumstances, that wouldn’t be overly helpful, but, we know that photographs were a relatively new medium and that a Mr James A Forrest is listed as one of the founding members of the Liverpool Photographic Society that was started in March 1853. So using that information, and the additional fact that the shadows cast are sharp from the sun being very high in the sky, we can hazard a pretty good guess that it is the summertime of 1853 or 1854.

So, what happened to the steps?  Simply put, they were removed because they didn’t fit in with what the architect who was working on the building wanted to achieve.  Harvey Lonsdale Elmes, the original architect of St George’s Hall died in 1847. In 1851, Charles Robert Cockerell was called in to deal mainly with the internal decoration of the Hall.  Cockerell also had several ideas to improve upon the designs of Elmes for the exterior that he pitched to the Corporation (the governing body of Liverpool).  They were excited about these ideas and allowed him to proceed. 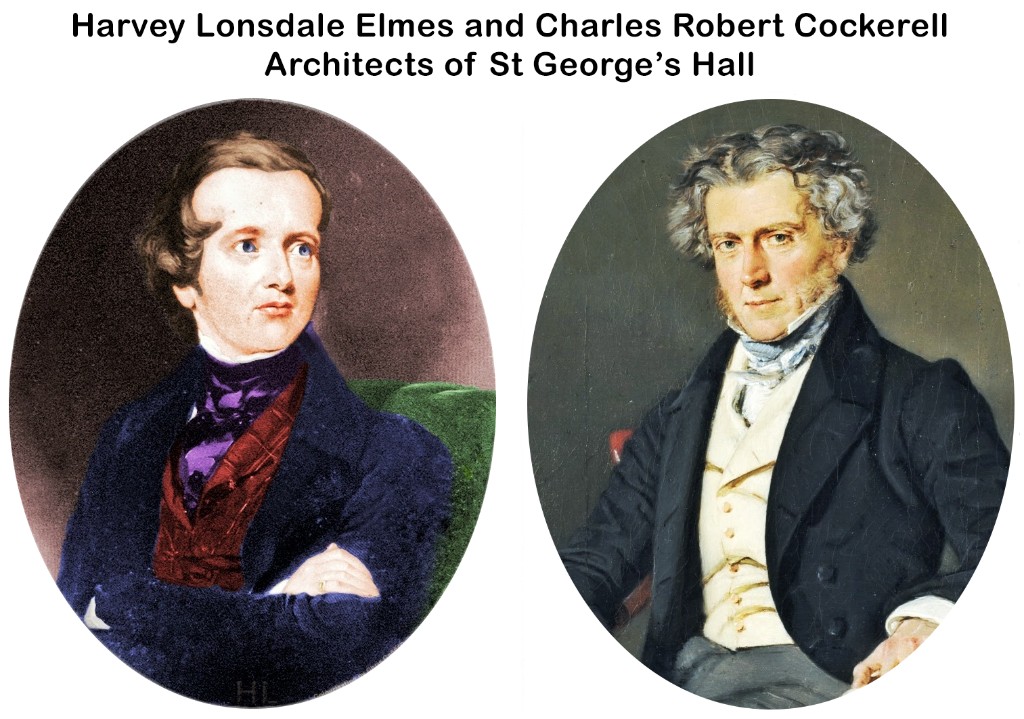 Cockerell remodelled St George’s Plateau and removed the steps during this process.  His idea was to have St George’s Hall look like the Parthenon atop the Acropolis in Athens and the steps spoilt the overall effect.

Cockerell also had another idea – to place a sculpture within the empty tympanum that was above the South Entrance. The sculpture can be seen clearly in the above photograph.

That sculpture, and what happened to it, is what we will now look at in more depth:

During the building of St George’s Hall, the original Architect, Harvey Lonsdale Elmes was taken ill with consumption and died in 1847 before seeing its completion. In 1851, Elmes’ mentor, Charles Robert Cockerell was asked to design the interior decoration. Whilst doing this, he also added a couple of his own flourishes to the building – one of which being a sculptured pediment on the South Entrance.

It should be noted that Elmes’ original sketches for his competition entry for an assizes did have a rough sketching of a sculpture in the pediment on the portico (as he had no doubt been inspired for his design by the Fitzwilliam Museum in Cambridge (which, incidentally, Cockerell had worked on). 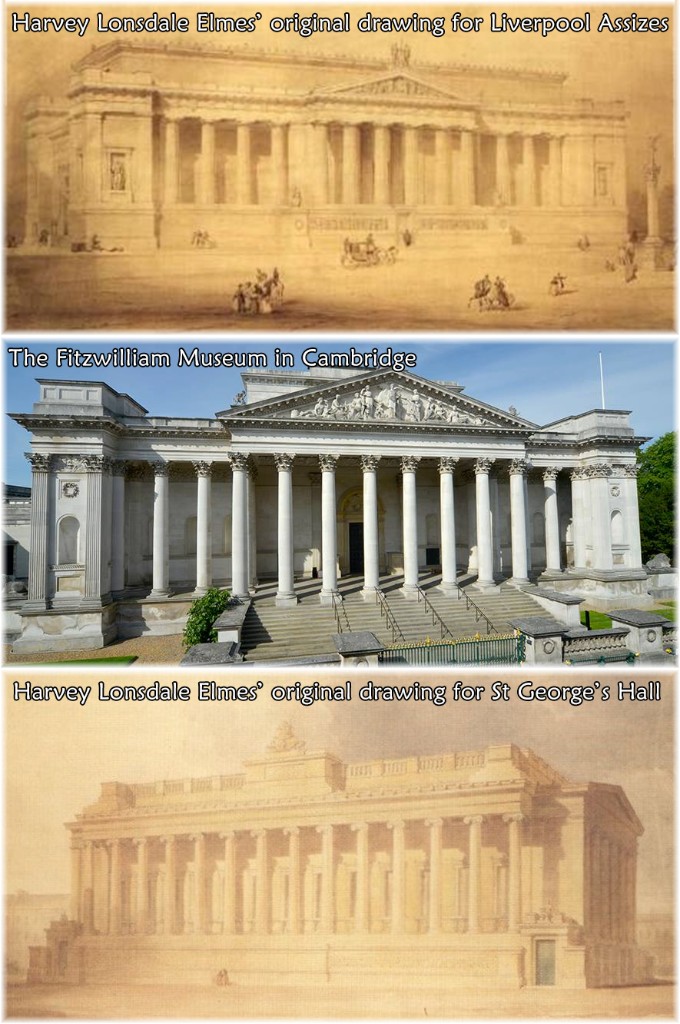 Whereas his original sketch for the hall shows an empty tympanum. On combining the hall with the assizes, he translated the central tympanum to the south entrance of the hall along with the pediment idea for the assizes.

Even though his amended design showed a rudimentary sculptured pediment in the tympanum, Elmes had personally inspected the finished stone works and – allegedly – declared that the space was never meant to be hidden.

As mentioned earlier, during C R Cockerell’s involvement in the decoration of the building (from 1851), along with ideas such as an extended Plateau, Minton floor, Grand Organ and Small Concert Room, he also wanted a sculpture for the empty tympanum. He based it on a drawing that he had previously completed which was entitled ‘Idea for the Frontispiece of a Public Building in England’ that had greatly impressed Elmes. To have it carved, Cockerell turned to William Grinsell Nicholl, a sculptor who had held his patronage for some time. (Nicholl also designed the Lions and mermaid and merman lampholders that are on the plateau.

The completed sculpture has the following written description: “Britannia armed, her lion by her side, and seated on a rock, forms the centre: she holds in her left hand the olive-branch, and in her right the spear. She hails the four quarters of the globe, presented to her by Mercury; the last of whom, Africa, inclines with the form of the pediment and, with her negro children, acknowledges her obligations to the queen of freedom, who laboured so long and successfully for their emancipation: beyond are the vine and foreign productions; the husbandman and his plough, his wife with the distaff, and her child, express industry, manufacture, and domesticity: at the end are labourers at the anvil, the anchor, and the arms of mail, which she has not forgotten how to use”

So what on earth happened to it?!

The sculpture was carved in Caen limestone, a relatively soft stone. Over the years, acidic rain had damaged it badly and in August 1950, large chunks of stone, some weighing around 50lb, fell more than 100ft to the ground below. Luckily, no one was injured.

The plan was to have it sorted by the following year in time for Festival of Britain, but on inspection it was discovered that the sculpture was too badly damaged to repair – at least in situ. The decision to take it down and put into temporary storage was made, but subsequent inspections showed that it was irreparable and therefore the sad decision to break it up for hardcore road-fill was made. 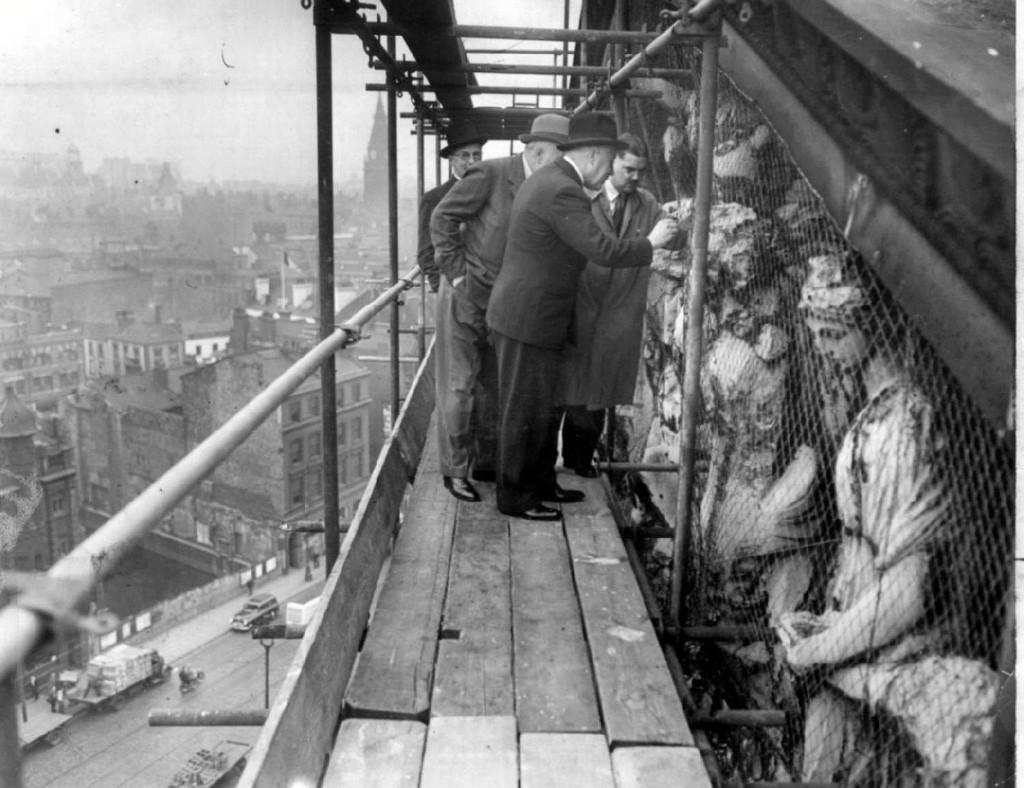 The missing pediment sculpture has been a great source of controversy for the city. There are many stories of why it was removed that neglect the fact that it was basically rotting and falling down anyway.

The most commonly repeated story is that it was removed or sanded off the hall because it depicted black slaves bowing before the might of Britannia. Now as the description above shows, this could not be further from the truth as it showed the role of Britain in the abolition of slavery. But nevertheless, it’s still a subject of great controversy.

Another tale is that it was secretly sold to an American, and there are also stories of the council denying that there ever was a sculpture in the pediment in the first place. Now, this I can believe! Not because the council is hiding the fact that it was ever there, but the denial is simply down to ignorance. Not everyone is interested in the history of the city’s buildings, so why should we expect every person on the council to have knowledge about them? It’s likely that the persons who have been challenged are simply unaware of its existence… Never attribute to malice that which is adequately explained by stupidity (or ignorance)

Since the removal of the sculpture, a few attempts to have it replaced have been made. In the 1980s, a suggestion to recreate it in stone-faced, reinforced plastic was put forward. However, austerity was biting hard and this was dismissed due to the “city’s economic climate”.

In the 1990s, political correctness scuppered plans by a group of sculptors to recreate it. Anti-racist groups jumped onto the rumour that the black figures kneeling before Britannia symbolised the slave trade and felt that recreating the pediment would offend the city’s black population. The same group also petitioned the council to change the names of all the roads related to the slave trade, but that is a story for another time!

A more recent attempt to recreate it had a new design made where the controversial figure that was causing all of the ruckus was changed to be “more like a chieftain, more like a king. Instead of kneeling down he is sitting in a more regal manner”. That was back in the early 2000s, and kind of just lost impetus from, I’m guessing, a lack of funds.

We will never know with 100% certainty if Harvey Lonsdale Elmes did actually want a sculpture in the pediment of St George’s Hall, or whether Cockerell decided to add it on his own. However, we do know that Elmes was relatively minimalist when it came to the decoration of his masterpiece – his completed rooms are plainly decorated and fit well with the Victorian ideal that the look of something should not detract from the purpose for which it was designed. Whereas, Cockerell with his Minton Floor, Grand Organ and the beautifully over-the-top gold Concert Room displays a love of decoration and flamboyance.

With these two facts taken into account, it seems likely that Cockerell himself decided to fill the pediment with a sculpture. That fact that he used a design that was liked by Elmes may have been a nod to his mentee who had sadly died only a few years earlier.

So, should the sculpture be replaced? If Elmes was indeed happy with the empty tympanum, should we leave it as, or should we follow Cockerell’s lead and put in a sculpture. And if a new sculpture is to be made, should we stick with the original design, or perhaps have a new one that shows a different scene? 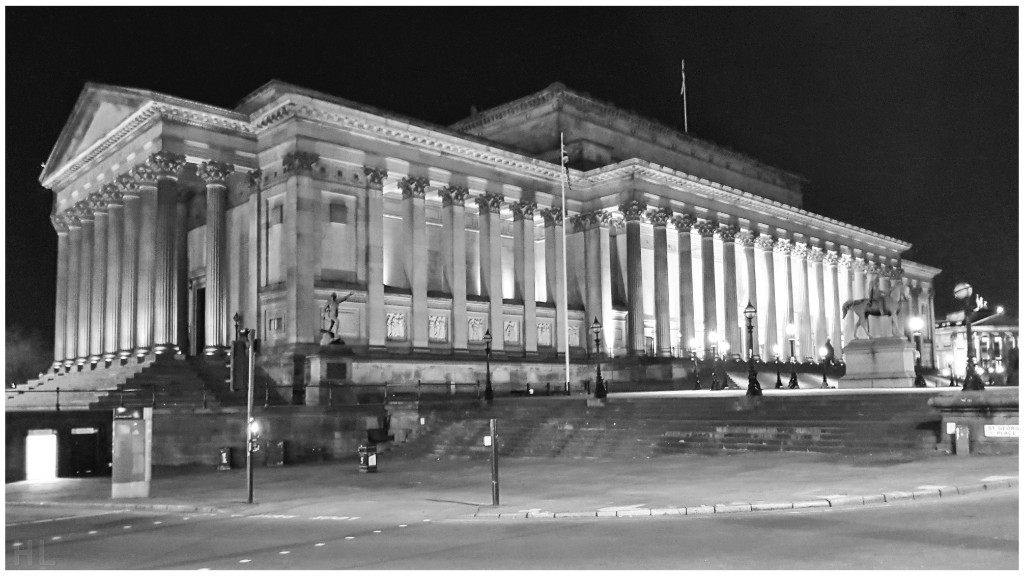 What do you think?

Chris is a local historian and tour guide that regularly visits schools and local history groups around Liverpool to talk about the rich history of the city.  He has received five-star reviews for his interesting and informative walking tours of Liverpool.  For more information, or to contact him, please visit http://www.hiddenliverpool.co.uk