Some Of The Best Burgers in Liverpool

“Who does the best burger?” – never has such a small amount of words caused such big controversy. We all have our own favourite but we’re here to list a couple of ours, in the hope they’ll be your new favourite too. There seems to be a epidemic sweeping through the streets these days; instead of food being seen as a means of energy to get through the day, it is slowly evolving into a challenge. Our quest for hunger has led us down many paths and led us to many burgers and we’ve decided to use this “research” for the good of mankind and release the best kept burger secrets.

Nolita have a great range of burgers but the one you need to look out for is the aptly named “Big boy”, you won’t know whether to eat it or get your picture taken with it. It is more of an edible multi-story city than a burger as it reigns in larger than the average toddler. What it boasts in quantity it does not lack in quality, every component marries up for a one way ticket to flavour town. It is not so much a burger as it is an endurance and despite countless queries, Nolita are yet to put a mattress in the corner for when the good people of Liverpool decide to wave the white flag of defeat. From any angle you look at it, this burger is intimidating and for a second the onion rings almost form eyes that look on at your fear in a disappointing disposition. Don’t let it win! 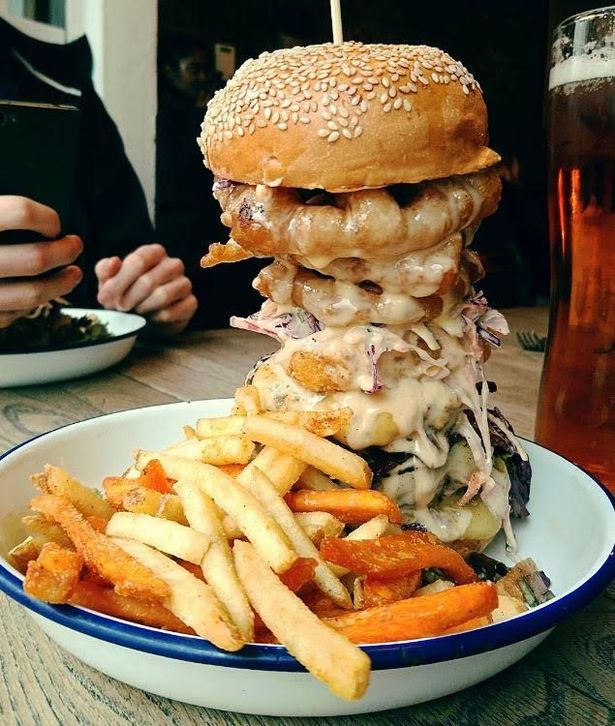 Taking a bite out of the Big Apple, Free State is inspired by the American dream, if that dream was full of gourmet burgers. Their burgers are award winning and after one bite you’ll surrender to this knowledge as it borderlines a religious experience. We recommend the double French onion burger, first marvel at its stature and then bite into the burger cooked medium that melts in your mouth. It is the kind of burger that during eating, enough falls off it to make another burger and at the end you find yourself in some labyrinth-like burger haven. 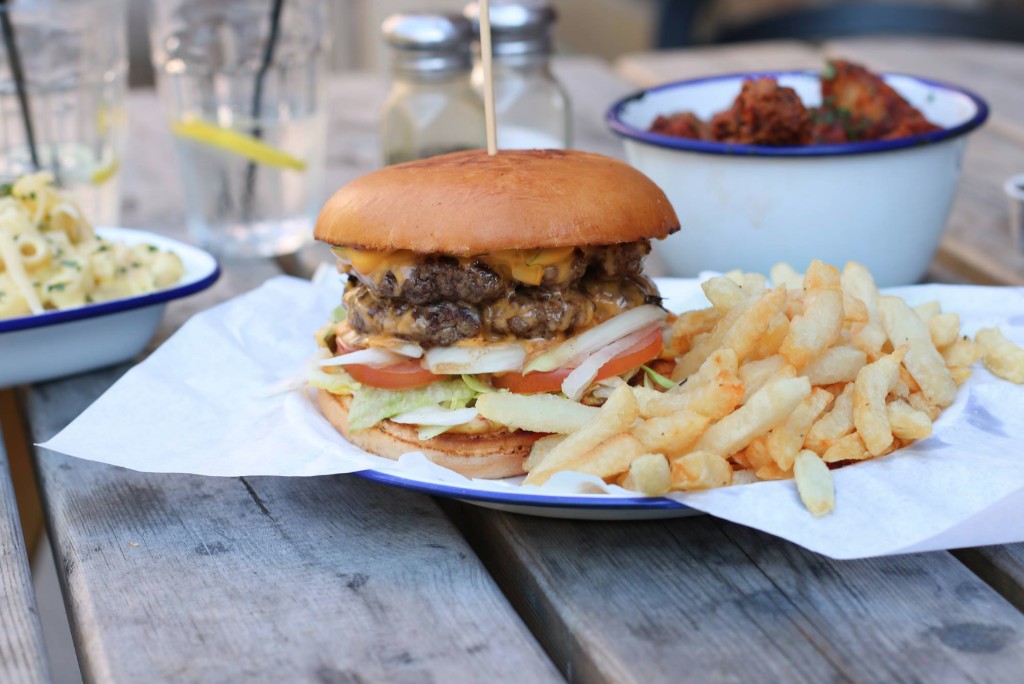 Model Monami Frost branched out into the burger world when she opened Frost Burgers on Wood Street last year. It’s 100% plant based burgers with attitude. Pictured below is the Double Trouble – the beefless Big Mac vegans have been queuing up for. If you were to blindfold us and let us try decide between that and an actual Big Mac, we’d struggle. When you’re next down there make sure you order the off the menu banana milkshake. It’s a game-changer.

The Cuban street food legends have created a burger so good we get emotional just talking about it. Slow cooked brisket, shoestring fries, pickled red onion, roast garlic aioli and guava BBQ sauce collide on a toasted brioche and it’s just beautiful. Some would say it’s almost too pretty to eat. 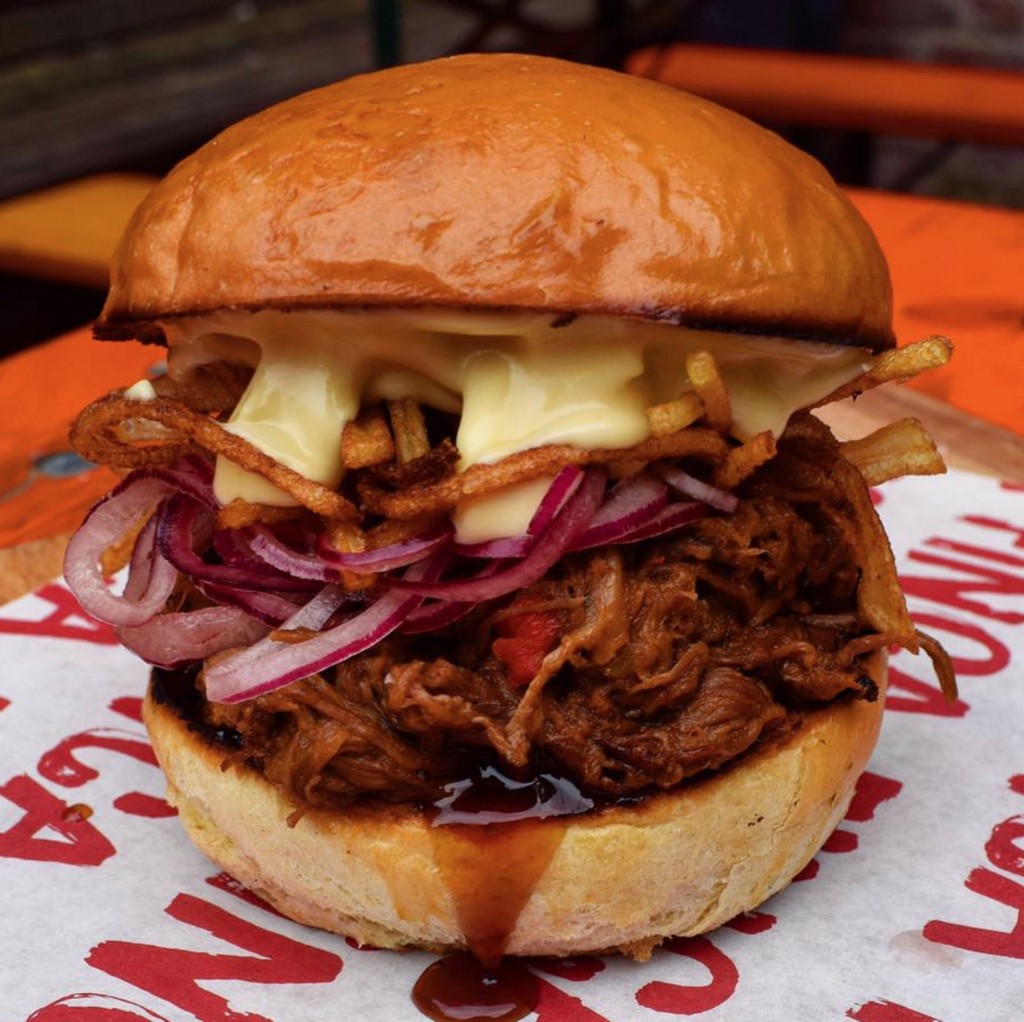 Sometimes in life, there’s nothing more fun than eating miniature food and pretending you’re a giant. Just us? Never mind. Lunya, one of Liverpool’s most revered restaurants, aren’t strangers to small plates and as a result have had many fall in love with their food. The mini iberico burgers with caramelised onions and a black bun are just phenomenal. 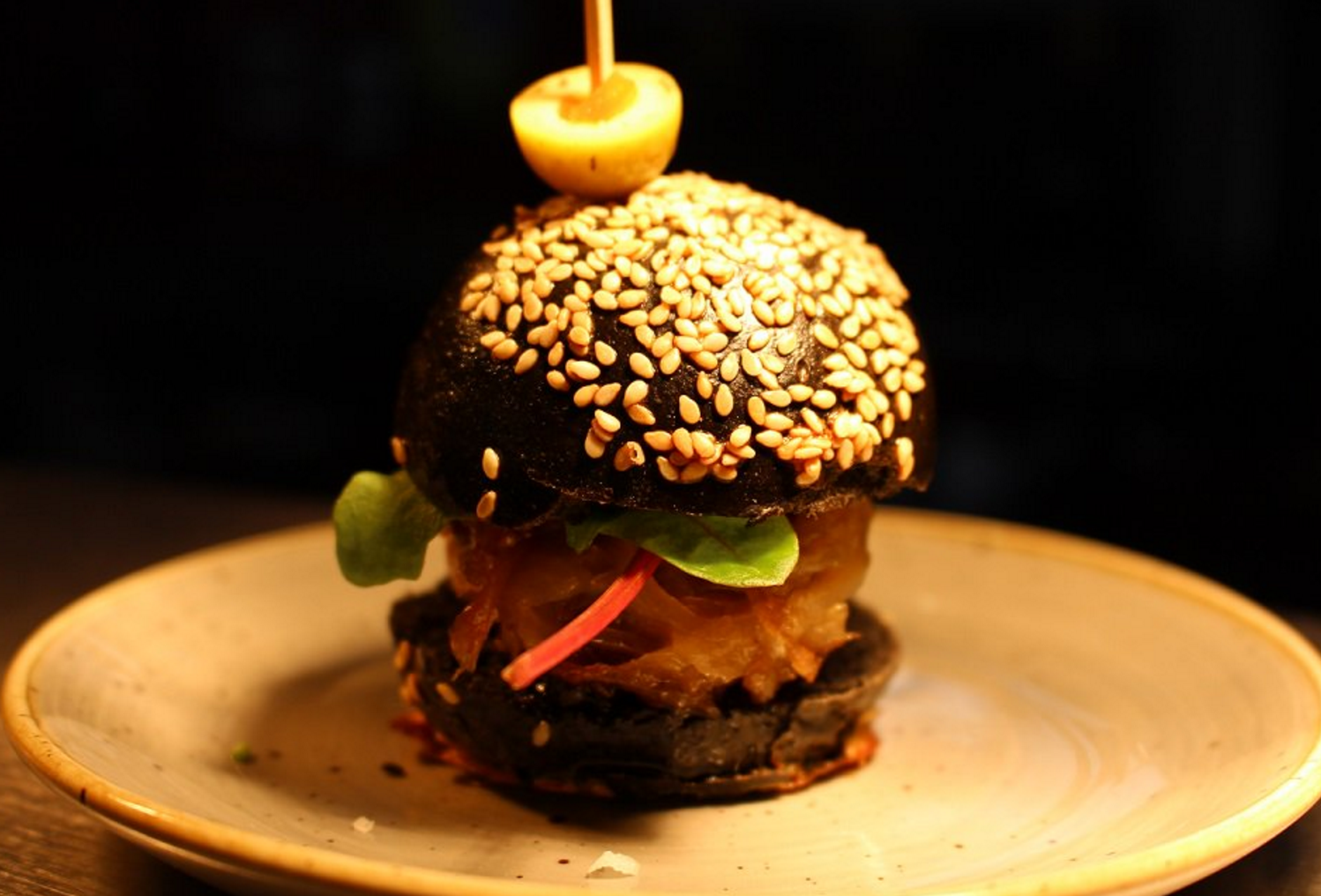 A restaurant and dive bar specialising in ribs, burgers, fried shrimp, steak, french fries and brisket. Walls are adorned with mysterious quotes lit up in neon and their selection of burgers is up there with the best. The king of them all is a beautiful burger called ‘Burning Love’. A delicious double patty with cheese, bacon onion rings, flambeed bourbon sauce, pickles and slaw. If that isn’t good enough there’s a Chupa Chup through the middle of it. 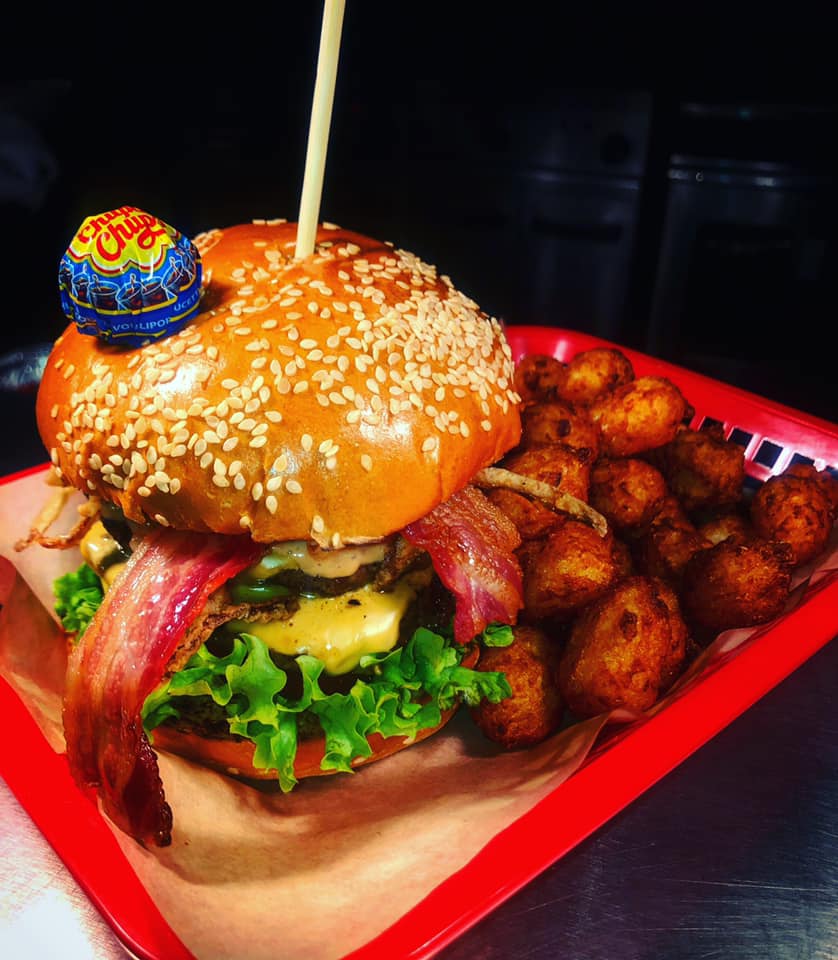 There’s nothing ‘almost’ about it, they’re famous for their burgers and thousands of people back this statement up each week. We’ve tried most of the menu and can’t get enough of the River Phoenix, a double cheeseburger with bacon, bbq fried onions, frazzles and fresh chilli chipotle ketchup. A saucy affair all drizzled in baconnaise; mayo infused with the sheer brilliance of bacon that could be put on a flip-flop and still taste good. Shut up and take our money. 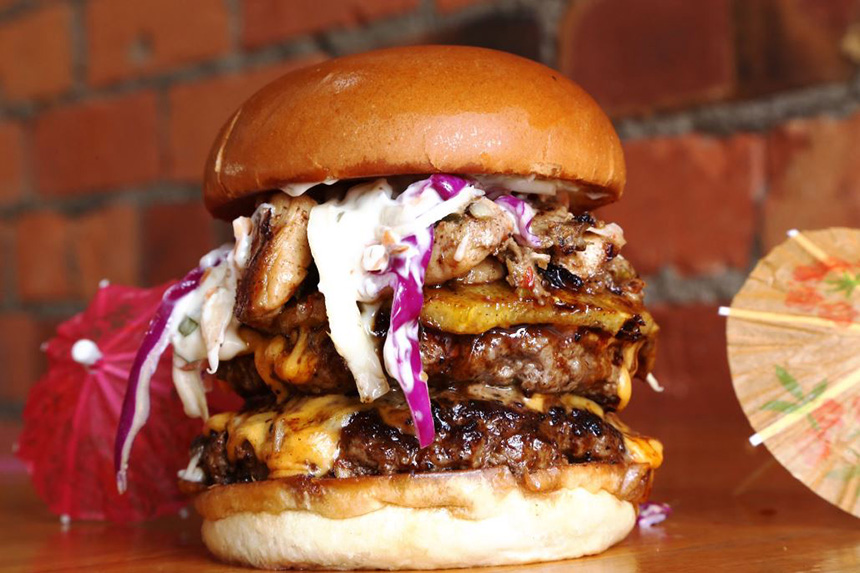 Set up by Action on Addiction, The Brink to many is known as a retreat for the recovering. This has built a strong podium for recovering addicts to immerse themselves back into mainstream society which shatters any predisposed thoughts customers might have of such a predicament after visiting. A non-alcoholic bar, with 73% of their employees in recovery themselves, The Brink is certainly extra ordinary and at the forefront of modern philanthropy. Impressive? Equally as impressive as their falafel and halloumi burger. 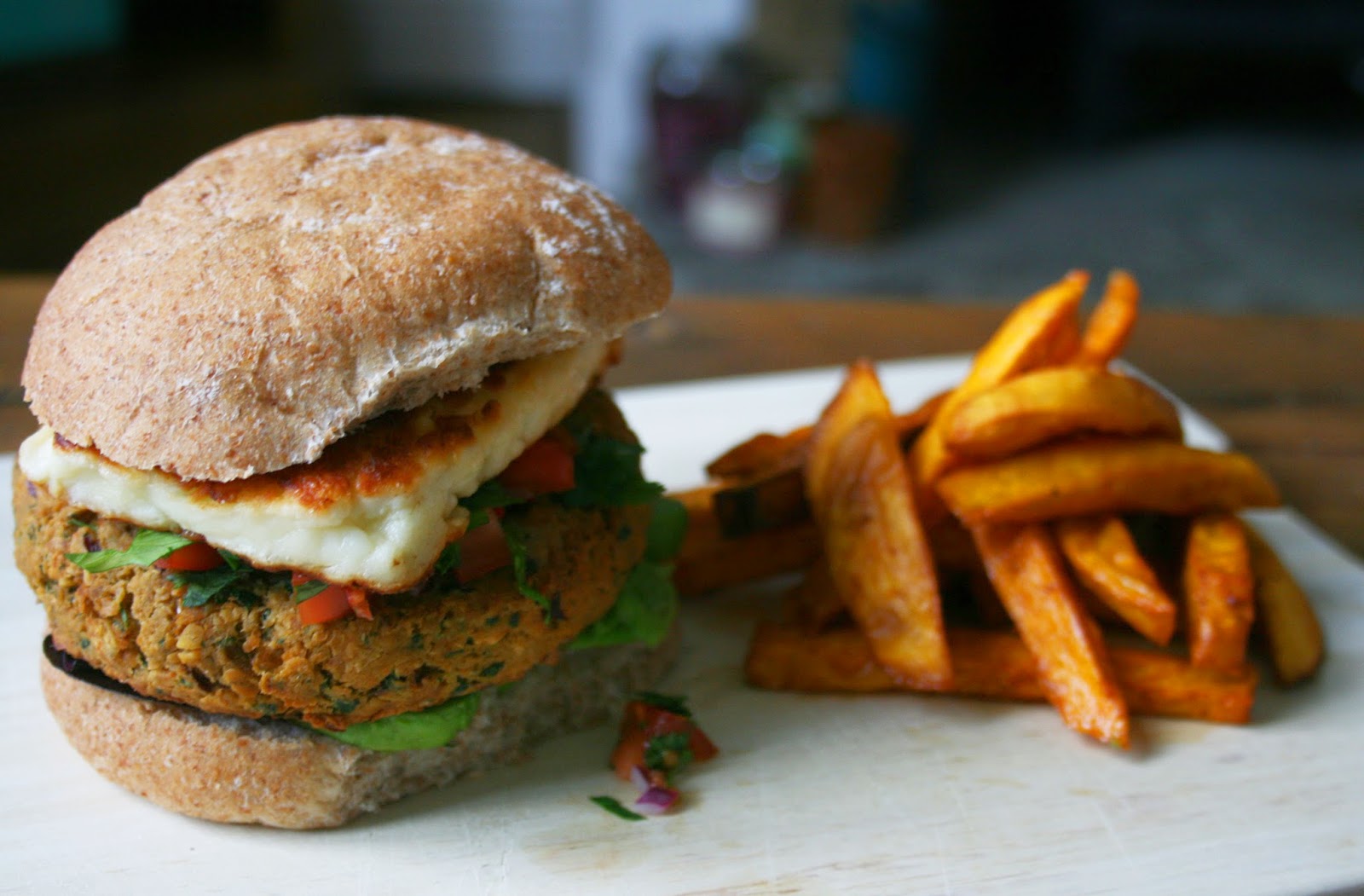 Down The Hatch – Liverpool’s dirty veggie junk food bunker is where meat eaters and zealous veggies collide for the love of deep fried goodness. A place where cutlery has no home, a place to eat like no one’s watching and a place you’ll probably need a nap after visiting. Yes, there’s indeed corners of double-sided menus with similar food but this whole establishment is dedicated to the wonders of veggie junk food and people can’t get enough of their zinger burger. 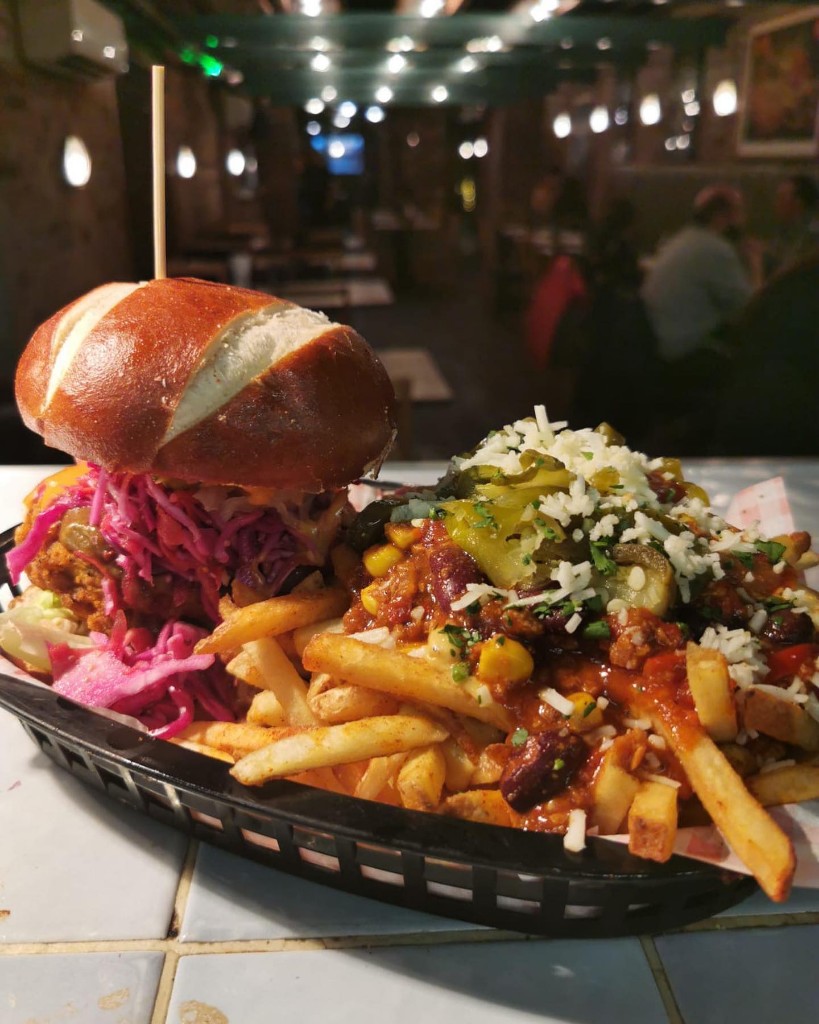 Meat Factory, the place where enough falls out of your burger whilst you’re eating it to make another burger. Walk along Lark Lane and you’ll find a place lit up in purple-neon where you should bring your own towel, so you can either throw it in and admit defeat or alternatively use it to wash your face. The Brooklyn Big Ass is exactly what it sounds like, an intimidating pile of meaty goodness. Finding an angle you feel confident enough to tackle it from will take up the majority of your time. It’d probably take less time to tell you what isn’t on the burger rather than what it is. It is a double patty, pulled pork, potato cake, bacon and cheesy concoction that will make moving for the next few hours prove difficult. 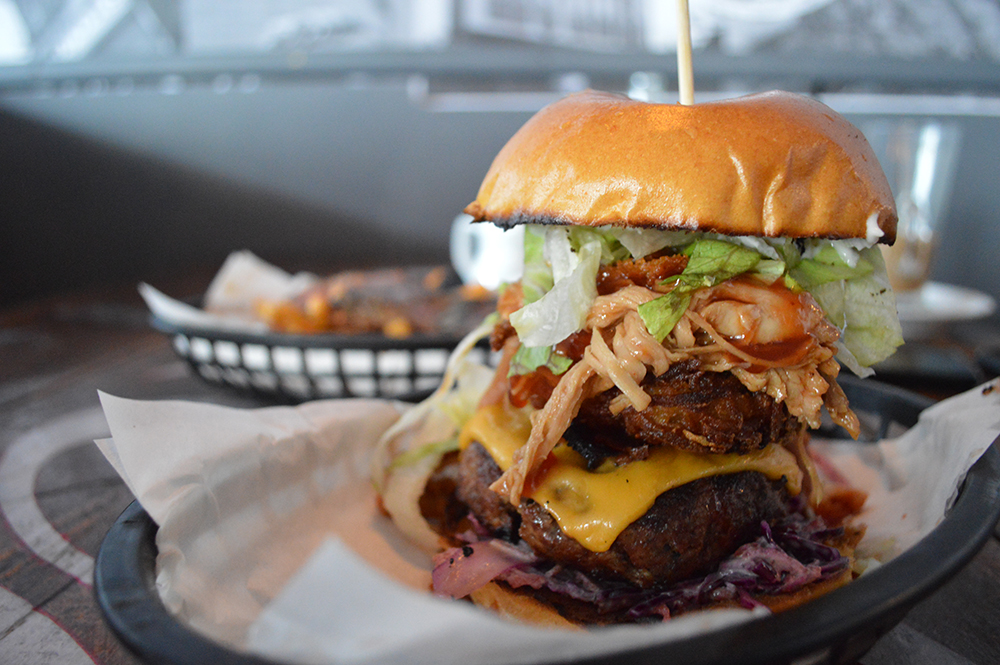 Bakchich is the uber trendy Lebanese restaurant based on Bold Street and more recently, Williamson Sq. The Veggie Burger from Bakchich is a delicious Halloumi steak burger filled with falafel and hummus, served in a pillowy soft brioche bun with some fries on the side. This is for both meat eaters and zealous veggies alike. 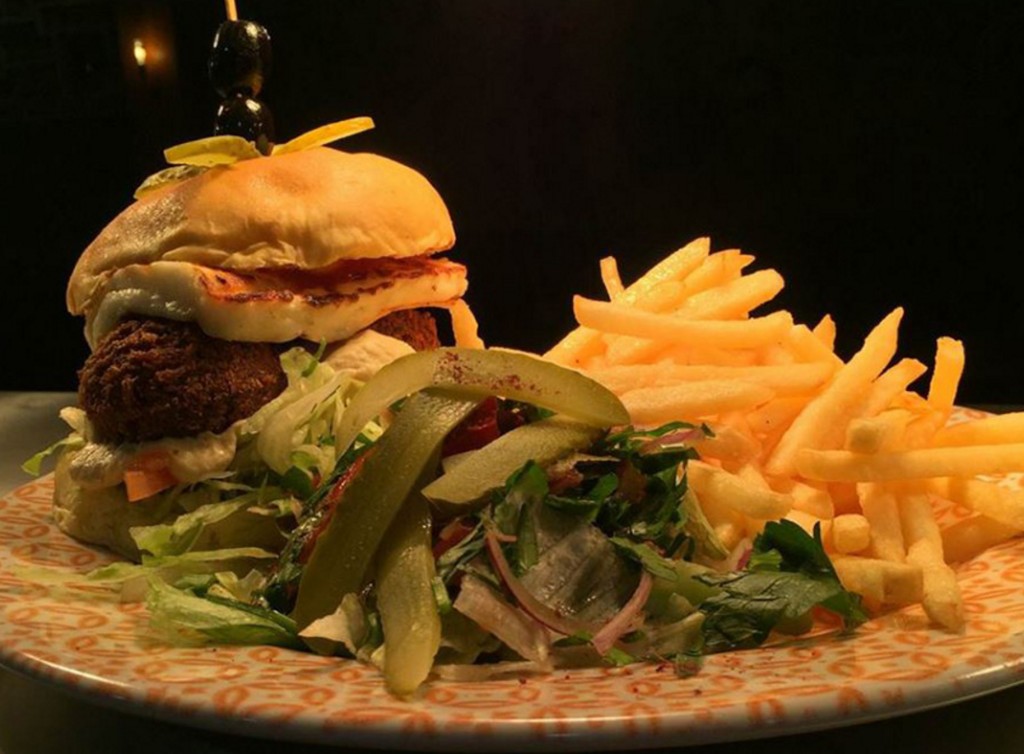 If you like a bit of spice in your life, this burger is the one for you. Portland St 358 only opened a few years ago and has cemented themselves as a fan favourite amongst the locals for their epic portions and consistent quality. The whole theme of the restaurant is based around street food but with a sprinkle of flair on top. Head down for the jam doughnut ice cream burger. This is just pure unadulterated filth. 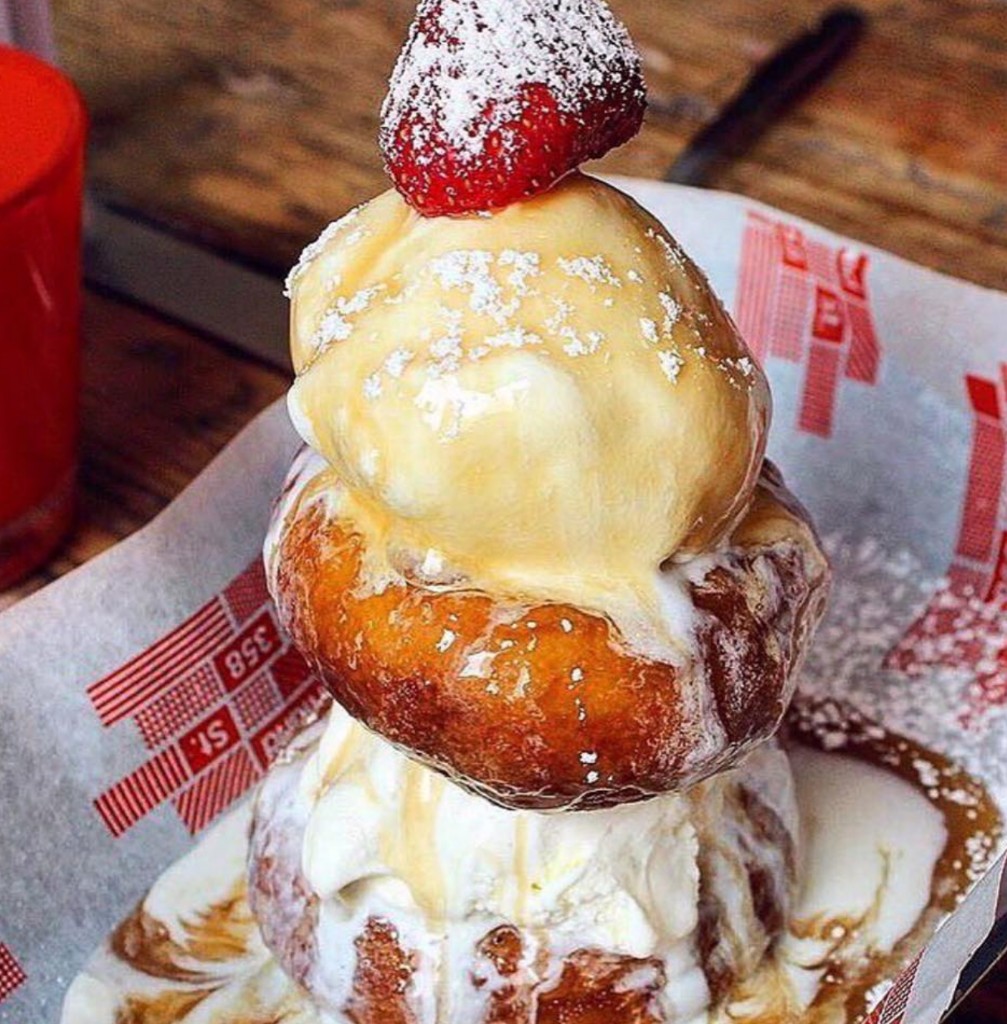 Delifonseca Dockside is serving up a menu exclusive with its vegan creation to mark Burger Day (August 24). The award-winning ‘foodie mecca’ is serving up a gourmet Mushroom and Nut burger using only plant-based ingredients which means that vegans and vegetarians can also indulge in a tasty treat on the novel calendar day. 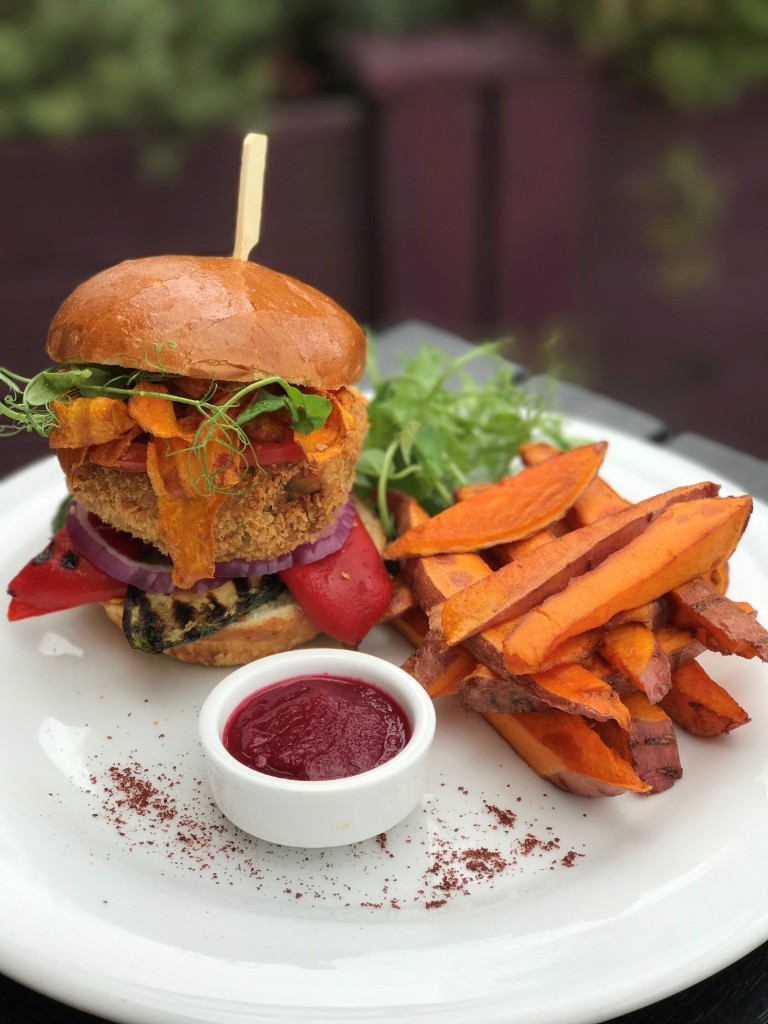 Next door to Little Furnace you’ll find the Craft Taproom, a dive bar with an encyclopaedic array of good beer at very reasonable prices. When you team that with great quizzes, boss burgers, kitchen takeovers and live music from the likes of Loose Moose and Silent Sleep, there’s no wonder this place is so popular. Their vegan markets are also ace. Feast your eyes on their cheeseburger and 100% vegan seitan burger. Now the hard part is which one do you choose… 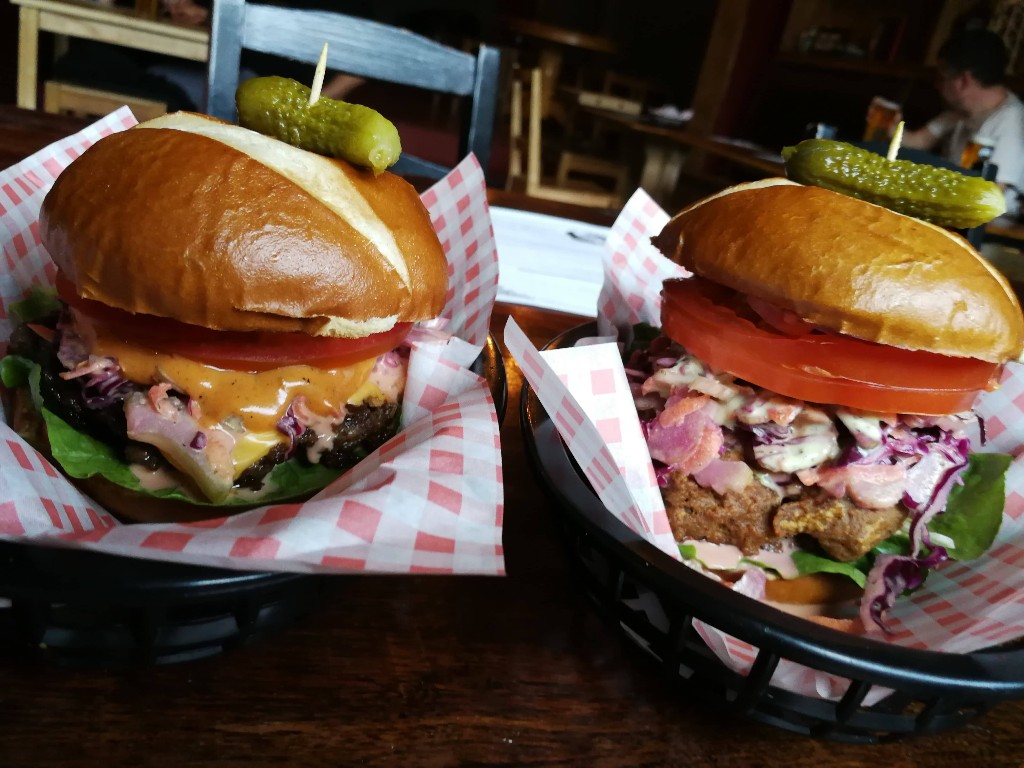 The Caledonia pub with principles, where the regulars have joined the side of seitan and embraced the Cali’s bold decision to go vegan last year. But don’t mistake their principles for tedium, the meat-eaters have stayed – probably because the vegan junk food on offer is so damn tasty. There’s award-winning chimken wings, burgers the size of your head and pulled jackfruit that leaves staunch carnivores questioning the meaning of life. Add a side of ‘potato three ways’ and a five-layer Biscoff windmill cake and you’re ripe for a nap by the piano. 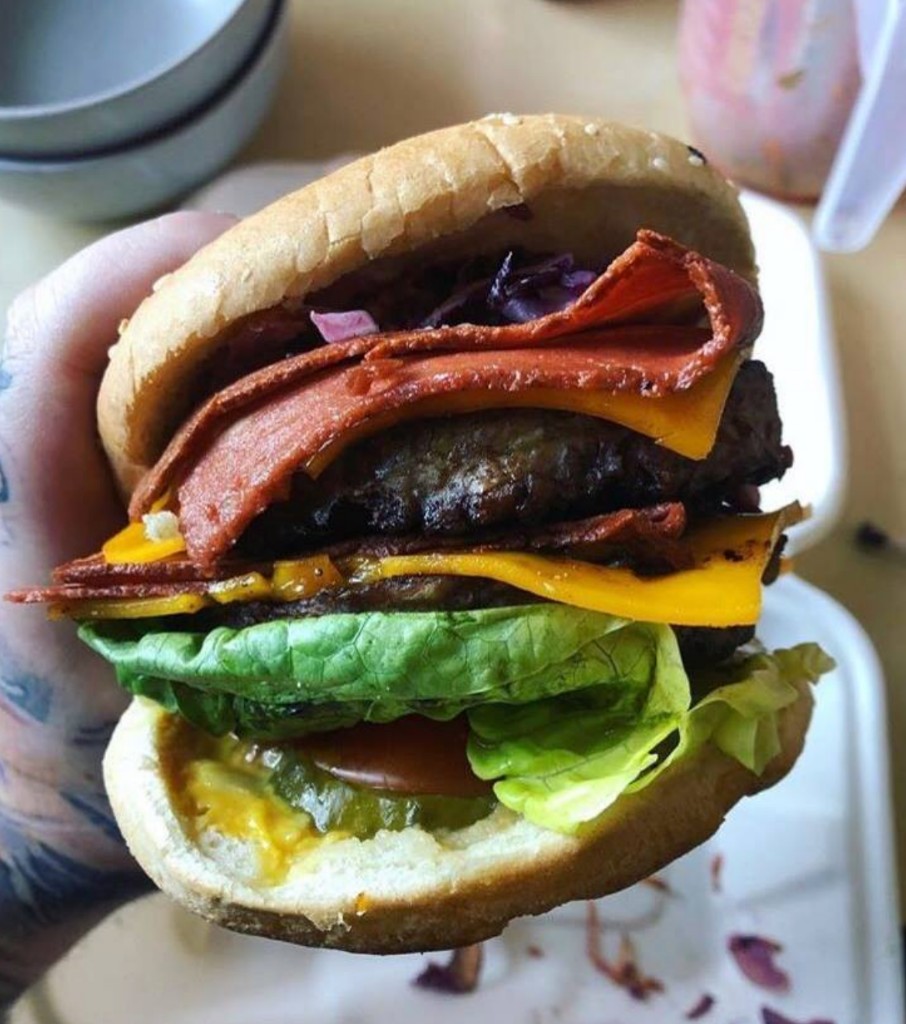 Based in The Baltic Triangle, The Baltic Social is people’s go-to burger bunker. Whilst they have some great savoury burgers on offer, that’s not what we are here to talk about today. Well known for pushing boundaries, they’ve invented a dessert burger. Yes – you’re looking at chocolate chip cookies sandwiching honeycomb ice cream and fresh raspberries with a side of churros and chocolate dip. Thank us later and tell your arteries sorry. 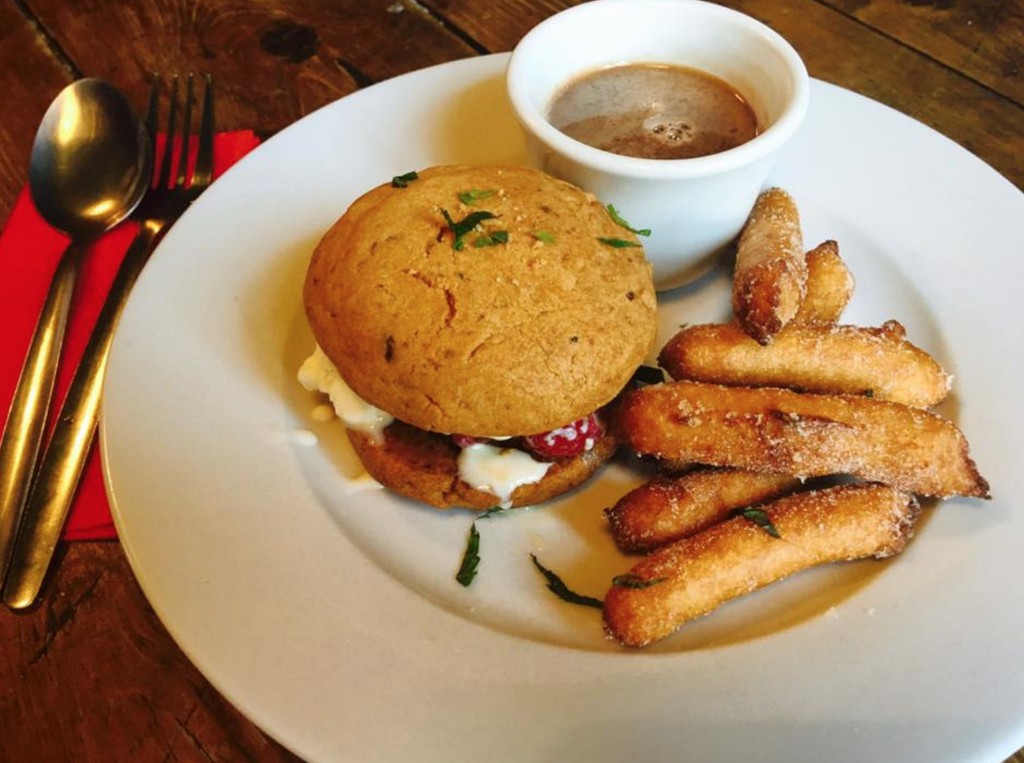 Next level fried chicken. Whilst Pattersons is known for its extravagance – from tacos made out of fried chicken to burgers so big you have to take a picture of them from the next restaurant – we often find ourselves returning for the Plain Jane. Couldn’t be more simple but that’s not undervaluing how hard it is to get good fried chicken right. Pull up a seat, crack open a beer and take a bite of this.

Where dreams come covered in red salt. Liverpool’s beloved premier chicken shop that is hand-licking good and an absolute must for a pit-stop on a night out. Much like other beloved chicken shops all over the UK, it is less about the chicken and more about the people; both behind and in front of the counter. Why Nabzys? Well, sometimes you just need a chicken burger with a hash brown on. We’re all adults and it’s our choice to exercise that right in such a delicious, heart-stopping way.

Don’t forget to stay safe and use a condiment.

The new Independent Liverpool card is here! Fancy discounts and deals at over 100 independents in Liverpool? Places like Nolita Cantina, Meat Factory, Down The Hatch, Pattersons and more? It’s just £10 for one or £15 for two at the moment. Shop local and save money, buy yours here.