For all Liver Birds.

The Liver Building was built in 1911 and on top of it lay two mythical birds. Birds famous all over the world, one female and one male. According to popular legend, the female looks out to sea, watching for seamen to return safely home, while the male looks towards the city, making sure the pubs are open. One local artist, named Paul Curtis, has done a homage to the famous Liver Birds and it’s recently made all the national papers. Based on Jamaica Street in Baltic Triangle, which was recently voted the coolest place to live in the UK by Sunday Times, the street art is simply the wings, leaving the perfect gap for people to stand in between. Since it’s been up thousands of people have had their picture taken, including a Scouse Pegasus police officer on a horse.

Not only that but Paul has since gone on to do a series of murals; The Beatles in Baltic Market, coffee street art at Coffee & Fandisha and most recently an interactive Abbey Road by Cains Brewery. These are just a few examples of all the work he’s done so we sat down with the artist behind it to find out his story: 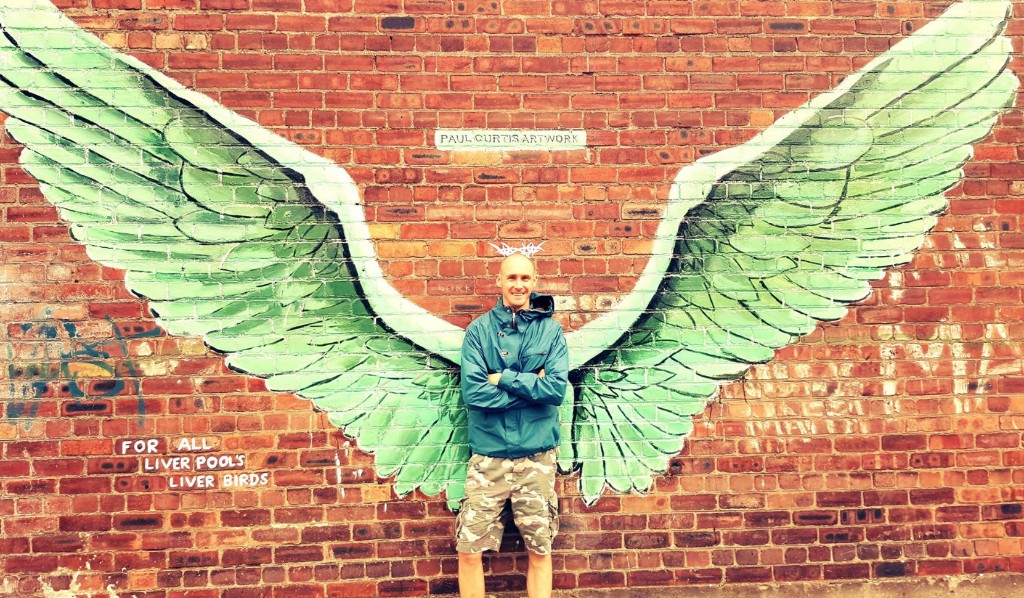 Hey Paul! Tell us about yourself?

I’m Paul, 38, born in Liverpool.  I grew up in Woolton. I went to Liverpool Uni to study Geology and then Aberdeen Uni to complete a MSc.  I stayed in Aberdeen for 12 years working in Oil and Gas, and then moved to London for 5 years.  I was made redundant in 2015 when the industry crashed.  I decided to travel the world for a year.  When I returned there was no improvement in the industry so I moved back to Liverpool.

How did you get into art?

I knew I could draw and paint from my school days, but rarely practised it.  My sister asked me to paint her new-born’s nursery with a Bambi Mural last summer.  I did it and posted a few pictures on Facebook.  The feedback was encouraging and people urged me to think about doing it professional.  It hasn’t been easy (chasing contracts and spending time doing designs and sketches and then hearing nothing back from the clients), but bit by bit things improved.  I have been doing portraits, murals, commissions and original art during this time, as well as some design work. 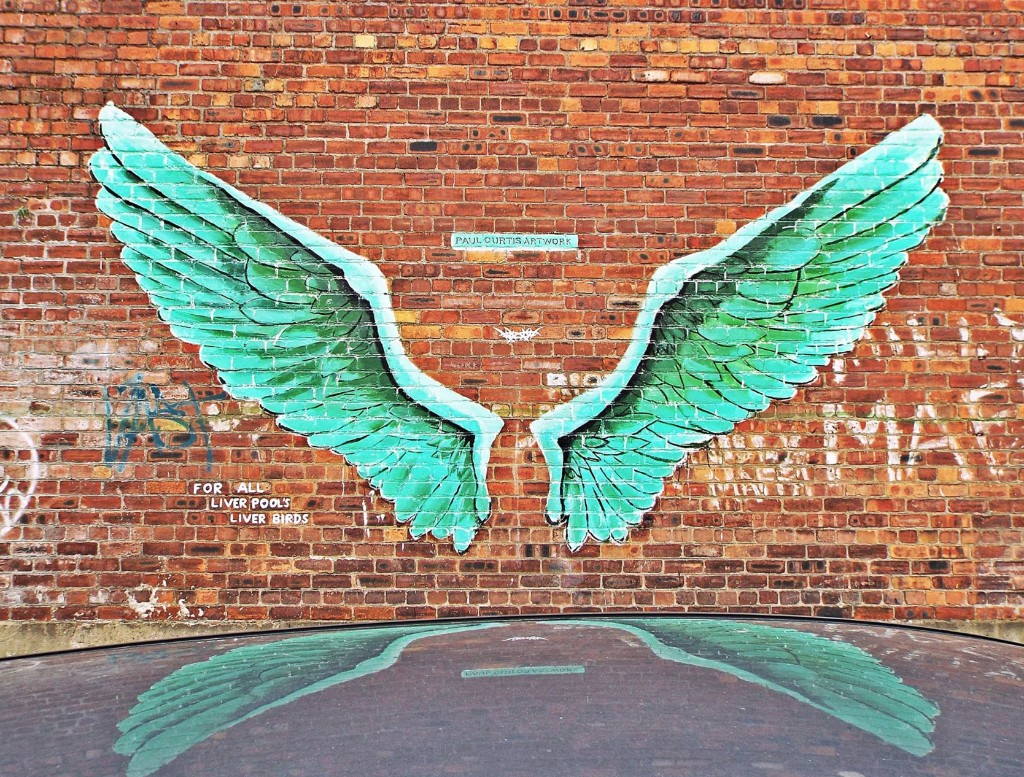 How did the idea come about for the art

I knew I needed to raise my profile somehow and get my name recognised.  Coupled with that, I am proud of Liverpool and really wanted to do a piece of street art that might become almost like a land mark and a part of the city.  The site I really wanted was the triangular wall that splits Jamaica Street from St James Street.  The design was going to be more complex and nothing linked to Liverpool specifically, just a good piece of art.  It would have taken about a week and cost a lot in paint!  When I was told by the council that this may soon be coming down, I scrapped that plan – sometimes these things happen to you for the best!

In the time that followed, I thought about a scaled down piece.  Three things became more important to the project; fun, interactivity and Liverpool.  The wings idea came to me first – people would have fun taking their picture as an angel.   I wasn’t sure how to link it to Liverpool.  One idea was to do one red and one blue, but I thought that was a bit naff and I didn’t want to really bring football into it.  I live in the shadow of the Liverbirds so the solution was in front of my face really.  I used the wall in the centre of Jamaica Street as firstly, the owners were positive about the project and granted me permission, and secondly, it was nearer the bars, so more people would stop for photos!

I’m glad I went with the copper oxide green, because I think it looks great and the link to the city is clear but subtle (when you don’t know the title!).  I was going to call it something like “The Angel of the Baltic”, but that didn’t really feel unique to the city.  I hope the title “For all Liverpool’s Liverbirds” makes it clear that it was intended to be a gift to the city. 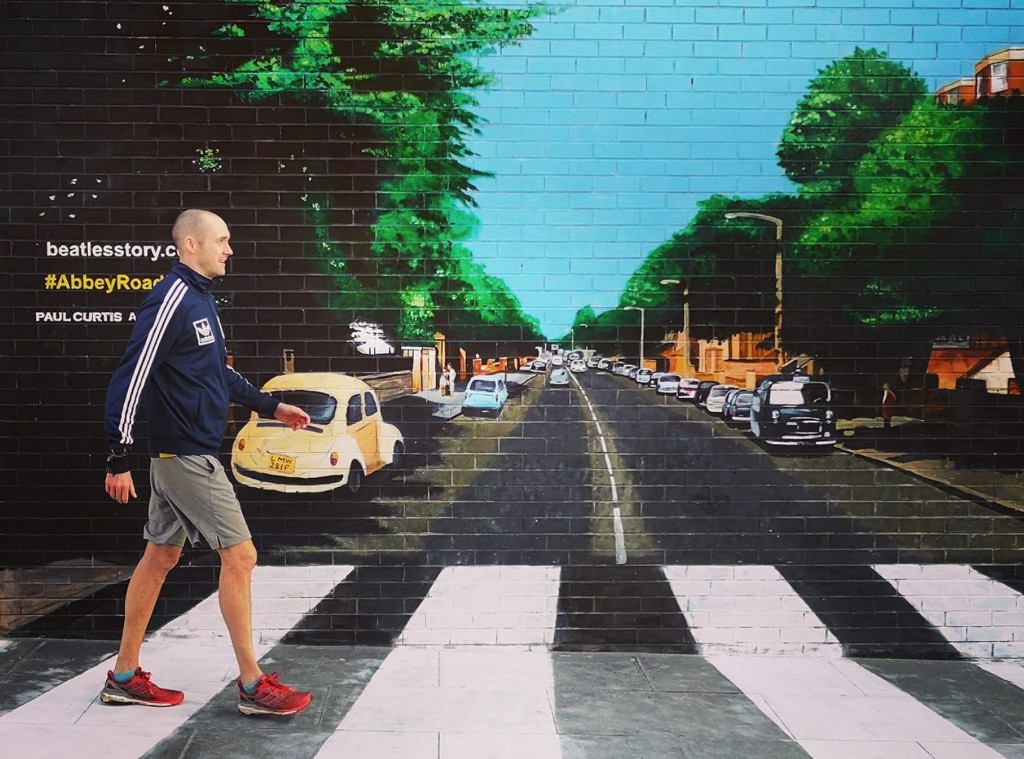 You’ve been in all the major newspapers and hundreds of people are getting their photos taken with it every day! How does it feel?

The response since I painted it has been unbelievable!  My intention was to brighten up peoples’ day and bring a smile to their face.  I knew people would like sharing their pictures, but I expected it to be more of a slow burner.  The whole thing rocketed!  Everyone has been really positive and I have had some lovely messages, makes me proud of the people of Liverpool.  Within a couple of days it had spread nationally (covered by The Guardian and Independent) and even internationally (Süddeutsche of Germany).  Amazing how things change in a week! The whole thing has overwhelmed me.  (I was gonna say it’s grown wings of its own, but that is desperately cheesy! Haha)