The first week of May marks 5 years of Howl at the Moon Hot Sauce, a local institution, a staple on the shelves of some of Liverpool’s best Independents.

We sat down with Joe, the man behind the hot sauce that has reduced many to tears over the years.

How did this all start?

It started about 6 or more years ago, when I was making a sauce at home for dinner: Garlic, tomatoes, onions and chillies, I tried putting a bit of maple syrup in it, because my auntie had moved to Canada and sent us over a huge bottle of it.  It was a taste sensation: Stinky garlic. hot chilli, sweet from the syrup, sour from the vinegar so then I looked at how you could bottle it.

For about a year I was giving bottles to friends and family, and when I was DJing at the vintage fair in the Kaz Garden, I’d always have a few bottles for sale. That’s how I got the labels, the labels are by HORSE, an Irish guy who lived in Liverpool and ran the Screenadelica festival, and when I was at a vintage fair, he was there selling his screen prints. Turns out he’s a massive hot sauce fan, so he agreed to do the label. Even though he’s moved to Mexico now, we still work together and he’s done most of the labels for my shelf range. I’ve used different artists, like local artist Sean Wars for some of the limited editions, and NY anti-folk singer and cartoonist Jeffery Lewis did my Halloween label. I was working with my local council to get my kitchen signed off and the sauce lab tested all through 2015.

I used to promote gigs in Liverpool for people like Gallon Drunk, Bob Log III  and Powersolo, and that was where the name Howl at the Moon came from, that was the name of the club nights,  turns out it was good name for a hot sauce too. The final bit of the puzzle was finding somewhere to sell it…….Amy Collins, who now runs Liverpool Badge and Print Company Pin Head, was working at Matta’s, and it turns out SHE’S a massive hot sauce fan. So they said they’d put it on the shelf as a trial, the family who run Matta’s were really supportive, and in May 2016 we finally put it in the shops. 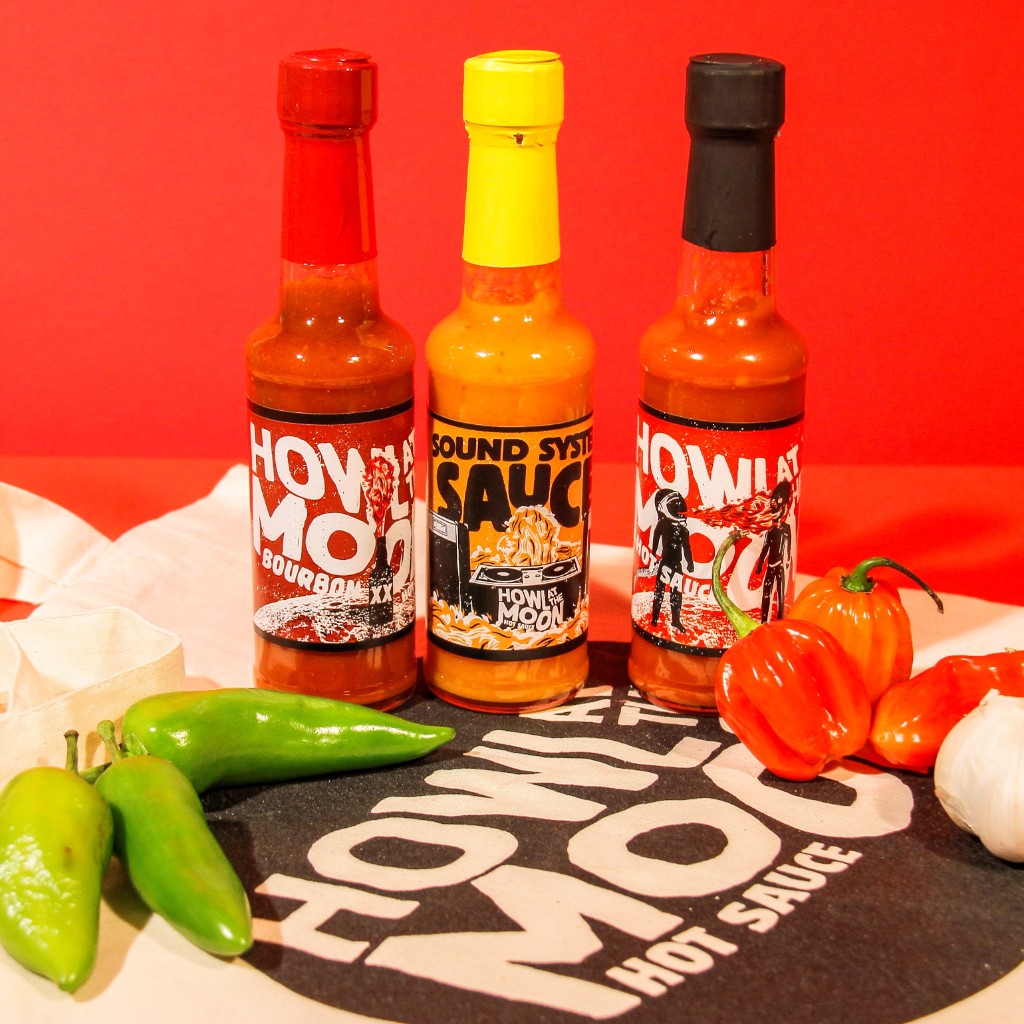 How has it been going?

It’s been incredible, especially the first 2 years, I was featured on a BBC TV show with local food legend Nisha Katona from Mowgli. which was a very surreal experience, filming over 3 days in my tiny kitchen and then in a farm shop in North Yorkshire. The programme was a mashup of Dragons Den, Bake Off and Masterchef. I don’t know whose idea it was to set it in a tiny village with an average customer age of 104 years old, but it made for good telly having lots of old dears spluttering and panting on a spoonful of HOWL. When we were all sat watching it in my mum’s front room, my phone was going crazy….the programme started at 8pm and the first order came in at 8.17, and then they just poured in, my phone clicking with an order every 30 seconds or so. It took us weeks to clear the orders, even though I’d made a load of stock, just in case. I’ve had loads of support from other Liverpool food businesses, when I was doing the markets in 2016 and 2017 The Bagelry, Cakehole and The GF Pie Co had just started as well, so you would see everyone at the same markets and vegan fairs, everyone was so warm and friendly and supportive. Those companies are now firmly established in Liverpool, and all started in home kitchens, just like us. I’ve yet to move into my own kitchen, I still make everything in my 4’x9′ galley kitchen at home in Runcorn. The Bagelry made a HOWL bagel for a while, Sound Food and Drink (RIP) made a HOWL pizza, Craft Taproom have a HOWL cocktail called Howl at the Mule, a spicy Moscow mule and the first year that Down the Hatch was running they had a spicy HOWL burger.

Two years ago we won an award in the Taste Cheshire Food Awards, we were in the final three of “best small food producer” and we got the silver award. I’d obviously never been to anything like that before. It was a posh do at Chester race course, I picked my wife up and charged around the room yelling like a chump. I keep the award on my mantelpiece, like a proud nana with her grandkids sports trophies.

We started off making just the original sauce, but people become addicted and they want to support you by buying as many as they can. So in Mattas now you can get the standard four sauces: Original, Extra Hot with Bourbon, Soundsystem Sauce, and the milder Breakfast sauce, like a spicy brown sauce for breakfast things, sausages both meaty and veggie are desperate to be dipped in it. At Halloween and Christmas we make special sauces, the Boxing Day Sauce is flavoured with date syrup and Xmas spices, the Halloween one is made with pumpkin. I still get messages from people all around the country who have been ordering the sauce for years now, and sometimes I’ll open the emails in the morning and find a message that makes me cry: “You have changed breakfast forever”, “This sauce should be in the taps instead of water”, things like that. 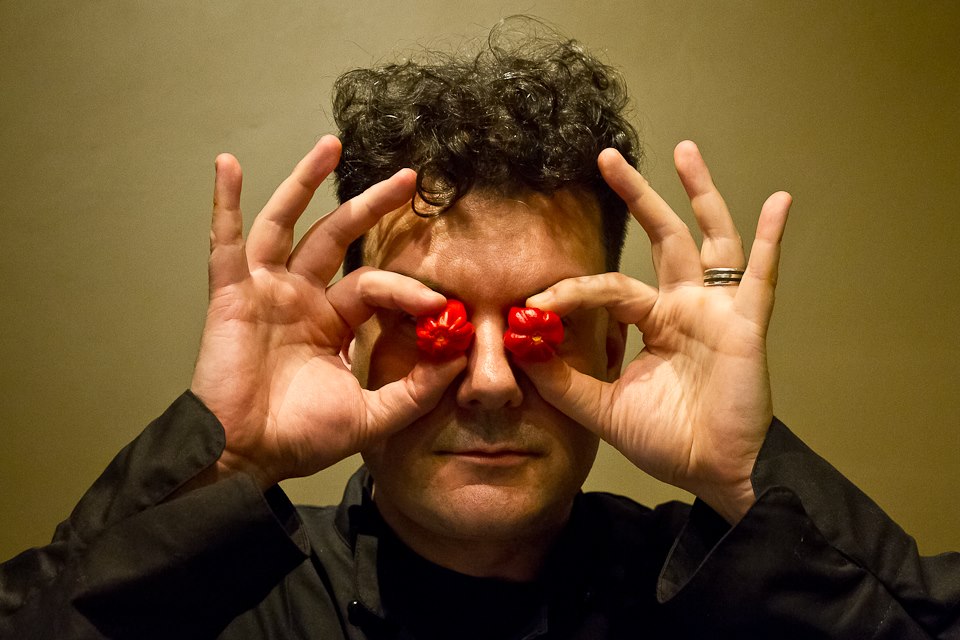 What are you looking forward to in the future?

I thought the hot sauce market was crowded when I started 5 years ago,  I think there are 3 or 4 times as many producers now. Two years running we’ve been featured in the “Top 100” UK sauces, which shows how many producers there are. So it’s important to keep looking at new flavours, new techniques. It’s a bit like writing your difficult 3rd album, it gets harder and harder each time to make something new, unusual and tasty. The most recent limited edition is a sauce based on the first Wu-Tang Clan album, Enter the 36 Chambers. It uses 36 different chillies, blended with soy sauce, ginger and Chinese 5 spice. I haven’t tasted anything like it before, it’s sweetened with honey  (Wu Tang Clan’s fringe rappers are called Killer Bees) and there is a vegan version with agave syrup. I made a ridiculous fake Kung Fu video for it, with the soundtrack recorded by my brother, who runs the Drop the Dumbulls venue.

I’m talking to a few different food places in the NW about collaborations, hopefully Northern Soul Grilled Cheese in Manchester will have a HOWL special in the future, once everything has opened up again. If any places in Liverpool want to collaborate, just get in touch.

Usually we do some DJ events or gigs for the HOWL birthday month, it’s a bit different this year,  because of COVID. The very first gig I put on was Bob Log III at Mello Mello (RIP), and I’ve made him a few runs of hot sauce for his UK tours, so he’s made a birthday song for HOWL, we’re getting a small run of 7″ vinyls made for the end of May. DIY til we die! 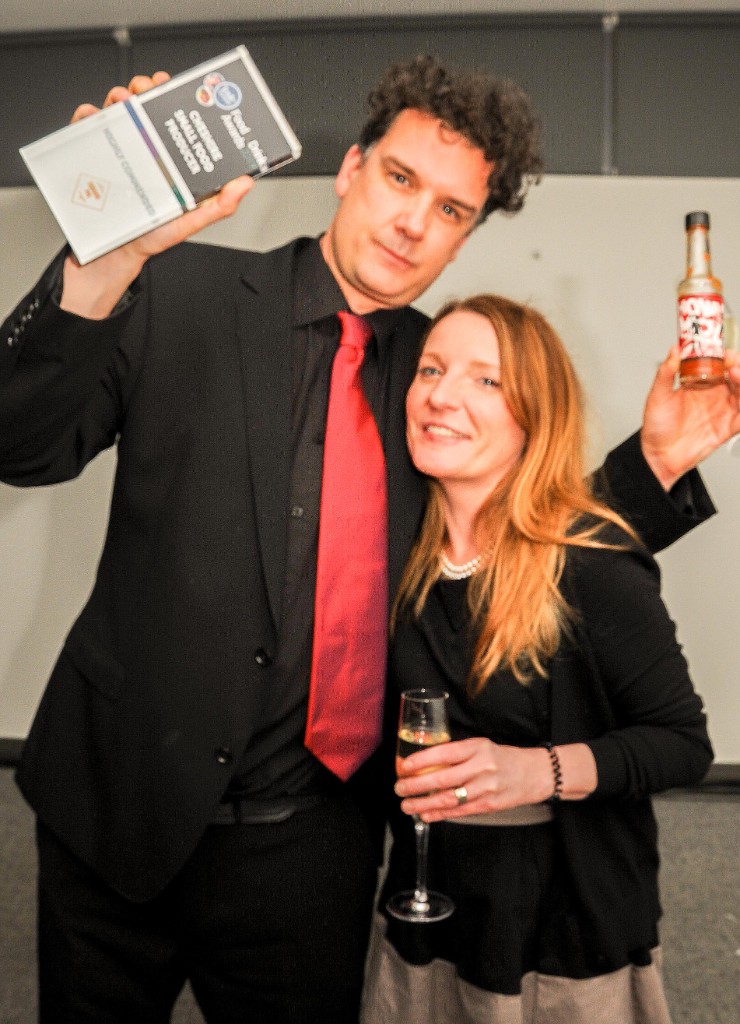 HOWL is available from Matta’s on Bold St, Purple Carrot on Smithdown Rd and The Bread Shop in Aigburth Vale plus other shops across the Northwest and online: www.hatmhotsauce.com